Ford confirmed price cuts Wednesday for the all-electric 2021 Mustang Mach-E SUV that is scheduled to be built and delivered later this year.

It is not typical for an automaker to cut prices on a new vehicle a company has touted for its strong demand and growing popularity. But Ford alerted dealers to the cuts in a memo Tuesday, the company confirmed to the Free Press.

“The ‘why’ is the big question,” said Michelle Krebs, executive analyst at Autotrader. “It is an increasingly competitive market out there for EVs. And the market, at the moment, is pretty small.”

Ford spokeswoman Emma Bergg said simply, “Exceptional value has always been a hallmark of the Mustang brand. In addition to its great all-electric driving range and performance, we’re adjusting Mustang Mach-E pricing to remain fully competitive in a segment that is seeing dynamic price changes.” 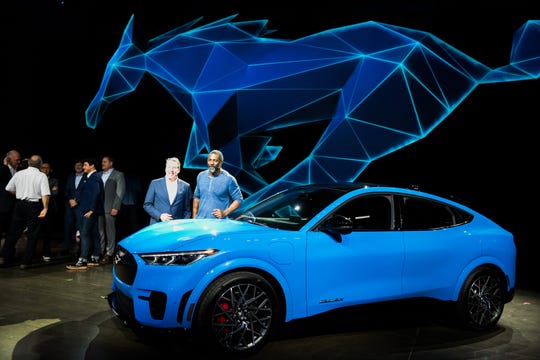 Ask HR: Do I need to take paid time off to vote?

She confirmed to the Free Press the price reductions below, which do not reflect a $7,500 federal tax credit for electric vehicles:

When asked if perhaps the Mach-E is less competitive than Ford initially portrayed, Bergg said, “Not at all. We are always monitoring the market and looking at ways to offer our customers maximum value. Mustang Mach-E is no different.”

The Mach-E, which made its debut at the the L.A. auto show in November 2019, is produced in Cuautitlán Izcalli, Mexico.

The SUV, which touts a range of up to 300 miles, has generated considerable enthusiasm. Ford has declined to say how many orders have come in, except to say they’re steady.

Emmanuel Rosner of Deutsche Bank mentioned in an investor memo the “excellent reported performance” of going 0-60 mph in under 4 seconds. The vehicle had been scheduled for “simultaneous” delivery in Europe and North America, Ford said. Shipping time means “the U.S. will get cars first with EU deliveries starting early next year,” the company confirmed Wednesday.

News of the Mach-E price cuts was first reported by Electrek, an electric transportation website known for its coverage of Tesla.

Ford did not respond to the additional questions of how back orders might result in price cuts or whether the price reductions reflect new cost savings. Factories in Mexico shut down because of the coronavirus along with plants in the U.S.

“Never in my four decade career have I ever seen a case where a company reduced prices while claiming to have a massive order backlog,” he said. “In fact, the common thing is to raise prices.”

In addition to the Mustang Mach-E, Ford is launching the Bronco and 2021 Ford F-150 in coming months.