Who won the presidential debate is in the eye of the beholder as Trump and Biden argue, giving little of substance to voters and both claiming victory.

The raucous debate between President Trump and former vice president Joe Biden turned into a game of alphabet Tuesday when moderator Chris Wallace asked the two candidates whether the U.S. economy is in a V-shaped or K-shaped recovery from the coronavirus recession?

Trump said it was a V while Biden said looked like a K.

The exchange raised a more basic question: What is a V- or K-shaped recovery anyway?

A V-shaped rebound is when the economy contracts sharply but bounces back just as dramatically. Many economists believed this downturn might well be V-shaped because it was triggered by a pandemic that forced the shutdown of restaurants, shops, movie theaters and other businesses, and decimated the airline and hotel industries by chilling travel.

Yet as soon as the outbreak eases and businesses reopen, the economy theoretically can return to its previous output level.

Initially, the recovery did resemble a V. After the U.S. shed 22.1 million jobs in April and May, it recouped 7.5 million in May and June as restaurants and other businesses began reopening in phases.

But job growth slowed to 3.1 million in July and August and a report Friday is projected to show 850,000 payroll gains in September. The totals are expected to dip further in coming months as many restaurants and other outlets operate at limited capacity and many consumers shy away from public gathering spots amid the continuing spread of the virus. The travel industry remains in dire shape. And Congress is deadlocked over a new stimulus package to prop up struggling businesses and unemployed workers.

There’s also long-lasting damage: Failed businesses, and workers who have been permanently laid off.

Gus Faucher, chief economist of PNC Financial Services Group, doesn’t expect the country to recover all the jobs lost in the pandemic until 2023.

“It’s a solid recovery but it’s going to take time to get back to where we were,” Faucher says. 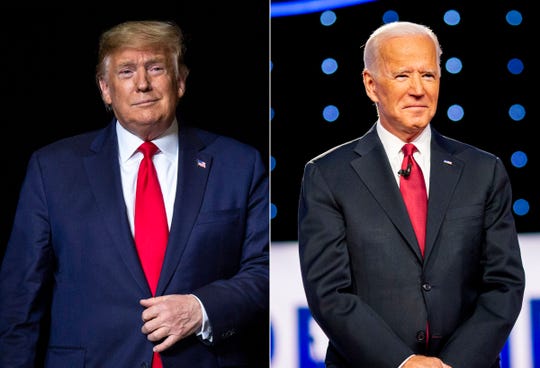 Another way to assess the rebound is by looking at the nation’s gross domestic product – the sum of all goods and services the economy churns out. After plunging at a record 31.4% annual rate in the second quarter, the economy is estimated to have grown about 32% in the third quarter (July-September).

But that gain doesn’t offset the similar-sized loss because the economy was smaller after the big decline. Returning to the nation’s late 2019 GDP level would require a 54% surge in output, says Ian Shepherdson, chief economist of Pantheon Macroeconomics.

Faucher estimates the economy will reach that benchmark late next year. As a result, what started as a V-shaped recovery is starting to look more like a U – a gradual climb back.

Some economists disagree. Morgan Stanley suggests the U.S. is in a relative V-shaped recovery, estimating it will take 18 months to reclaim its pre-pandemic GDP compared with 30 months in the Great Recession of 2007-09.

A rebound that resembles a K occurs when some parts of the economy bounce back sharply while others stumble. That is happening now and in more than one way.

Some industries – like restaurants, hotels, movie theaters and music venues – may continue to struggle for some time. Others – like grocery stores and technology providers such as Amazon and Zoom — are thriving. Home sales also have come back to pre-crisis levels on historically low mortgage rates and Americans’ desire to move to rural and suburban areas less affected by the pandemic.

Another way to look at the economy’s split personality is by income level. Low-income workers in service industries such as restaurants and retail continue to struggle while professionals who can work from home remain largely unscathed. Wealthy Americans, meanwhile, are benefiting from the stock market’s rally from its pandemic-induced crash earlier this year, as Biden pointed out.

It’s possible for the recovery to be V- and K-shaped at the same time, Faucher notes, if the strides made by some sectors or workers offset others’ struggles enough to swiftly lift the economy overall.

But that would be a tough balancing act, and many top economists reckon that’s likely not the current scenario as the U.S. continues to claw back from the wreckage of COVID-19.

So while the recovery is almost certainly K-shaped, it probably won’t be a V.