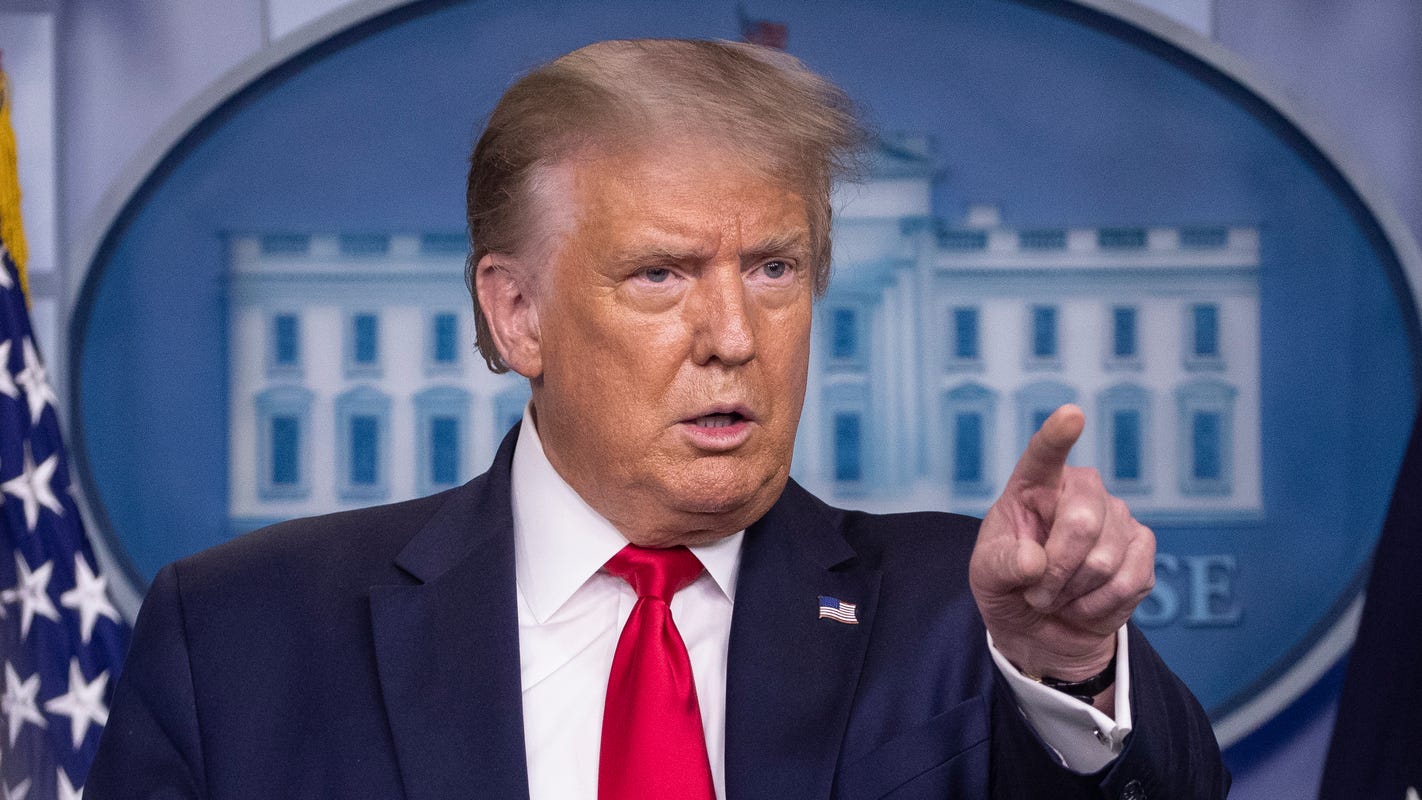 President Trump’s tax returns are back in the spotlight ahead of Tuesday night’s debate, where he’ll face off against Democratic nominee Joe Biden for the first time.

On Sunday, the New York Times published the first in a series of stories based on Trump’s tax returns, citing tax documents and data spanning two decades. It revealed that he has had small federal tax bills and major financial losses during his business career. Some of his tax maneuvers have come under legal scrutiny.

USA TODAY reached out to tax attorneys and legal experts to get their reaction. Without having access to Trump’s tax returns, they still don’t know exactly how much he has or hasn’t paid in taxes.

Still, if Trump paid very little or nothing at all in taxes, it would look bad for him politically heading into a tight race on Election Day, they said. But it doesn’t mean he did anything wrong because he could have been using the U.S. tax code to his advantage, they added. 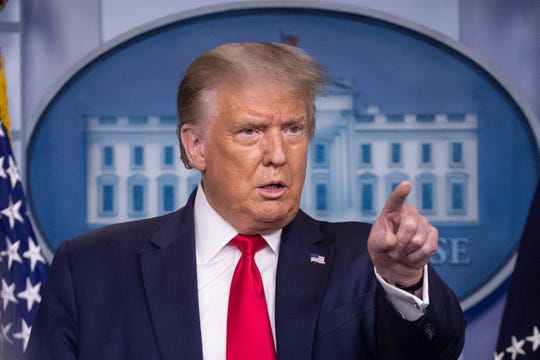 FILE – President Donald Trump points to a question as he speaks during a briefing with reporters in the James Brady Press Briefing Room of the White House. TikTok and its U.S. employees are planning to take the Trump administration to court over a sweeping order that could ban the popular video app, according to a lawyer preparing one of the lawsuits. (Photo: Alex Brandon, AP)

One thing that jumped out at experts was that Trump has generated significant business losses while writing off vast expenses, according to the New York Times report. In 2016, Trump paid just $750 in federal income taxes and paid another $750 the first year he was in the White House.

To be sure, the wealthy can manipulate the tax code to minimize their tax liabilities, according to Francine Lipman, a tax expert and professor with the University of Nevada-Las Vegas School of Law.

“These tax returns are aggressive. The devil is in the details, but we don’t have all the details,” says Lipman. “That doesn’t mean it’s tax fraud. But Trump is taking some very aggressive positions.”

Some tax and legal experts questioned his consulting fees. Trump wrote off $26 million in unexplained “consulting fees” as a business expense between 2010 and 2018, the New York Times said.

Large payments in business deals can raise red flags, particularly in places where “bribes or kickbacks to middlemen are routine,” the New York Times said. But the report found no evidence that Trump had engaged in such practices.

A possible explanation for at least some of the fees was that Trump “reduced his taxable income by treating a family member as a consultant, and then deducting the fee as a cost of doing business,” according to the report. One disclosure showed that nearly $750,000 went to Ivanka Trump, his daughter. The New York Times suggests this may violate tax laws.

Another thing that piqued experts interest about Trump, a real estate developer, was that Trump Corporation, a real estate services company, reported losing $134 million since 2000, according to the New York Times.

Dan Geltrude, a CPA, tax expert and founder of accounting firm Geltrude & Company LLC in Nutley, New Jersey, thinks that Trump has enormous depreciation deductions that have offset his income, which isn’t unusual for those in his position. Depreciation is the decrease in the value of an asset.

Investment real estate, for instance, is allowed a deduction for depreciation, according to Geltrude, which can be substantial and significantly reduce taxable income. So it’s not that Trump doesn’t have income, it’s just likely shielded from taxes by depreciation, Geltrude added.

“There are ways to pay little in taxes. That’s not Trump’s fault. Blame the IRS tax code for that,” says Geltrude. “It’s reasonable that he would want to limit what he pays in taxes just like everyone else would.”

To be sure, even though depreciation could account for some of Trump’s losses, it may still not cover all of his losses, Lipman says.

Toby Mathis, a partner and attorney at Anderson Law Group in Las Vegas, Nevada, argued that Trump was taking advantage of tax incentives.

“Trump is doing exactly what Congress wants him to do,” says Mathis. “If you’re a business person and you’re willing to take risks, you’re going to get tax benefits. Why do they give them? Because lots of people will get hired to do the projects.”

Another thing that tax experts were concerned about was Trump’s decade-long audit battle with the IRS, which stems from a $72.9 million refund he claimed in 2010 after declaring huge losses in prior years.

Experts worry the fight could put him in a potential conflict of interest as president.

During the housing crisis, Trump suffered significant losses in real estate but was able to use them to offset  taxes he paid years earlier when he was on “The Apprentice” and generating large amounts of taxable income, she says.

Trump even got some help from President Obama. To mitigate the fallout from the Great Recession, Obama and Congress made such “net operating loss carrybacks” more generous by allowing tax filers to include more earlier years to incentivize businesses to invest during the downturn, Lipman explained.

Trump effectively got a “quick refund,” according to Lipman, designed by Congress to give struggling businesses a quick cash infusion.

But he could be on the hook for more than $100 million if there’s an an adverse ruling. That concerns tax experts since he appeared to have cash flow issues, according to the New York Times report.

“Trump’s IRS audit has been stalled for a decade and we don’t know what’s going on,” says Lipman. “He’s a sitting president who gets to choose the IRS commissioner and the Treasury secretary and potentially owes $100 million. It reeks of conflict of interest.”

Following the New York Times report, some have questioned whether Trump isn’t as wealthy as he claims. The tax returns, however, won’t provide his net worth, according to Geltrude. They will, however, show what’s generating his income and what he owns, he says.

“It’s difficult to determine someone’s net worth from tax returns,” says Jenson. “But if you have the business tax returns, you can see the assets and liabilities, which in essence shows the net worth of that business. But only on the book basis, not fair market value.”

Another thing that stood out to experts was that Trump spent more than $70,000 to style his hair, writing it off as a business expense when he was on “The Apprentice,” according to the New York Times.

That might surprise some Americans who may not realize that business owners have more leeway than employees to deduct certain expenses. Most employees, for instance, wouldn’t be able to deduct hair cut costs, says Phil Hackney, a law professor at the University of Pittsburgh.

“Generally, tax courts disallow hair cuts as a deduction for the vast majority of people because it’s a personal expense,” says Hackney.

Perhaps not for Trump, though.

That runs counter to the idea of an income tax, Hackney argued, which in theory tries to effectively tax personal expenses.

“If you find ways of deducting every act in society that you do, then you’ve basically eliminated an income tax for yourself,” says Hackney. “That creates real problems because employees can’t do that. He’s found ways to deduct things that everyone else pays taxes on.”