No reservation? No Bronco.

Demand for the 2021 Ford Bronco SUV is so strong that Ford doesn’t expect to fill all customer orders into 2022, the company told the Free Press.

The Bronco, a bestselling vehicle resurrected for the first time since it ended production 25 years ago, is being built to order initially.

People who have placed reservations are at the front of the line.

If you plan to wait until the SUV arrives in dealer showrooms, well, think again. If you want to own a Bronco anytime within the next two years, make your move soon.

Smart tip: Know what to expect and how to plan ahead.

Took Social Security too soon?: You could get a do-over

An estimated 150,000 reservations poured into Ford just two weeks after the big Bronco reveal, Chief Operating Officer Jim Farley said during an earnings call July 30. By mid-August, the company updated its reservation total to more than 165,000. 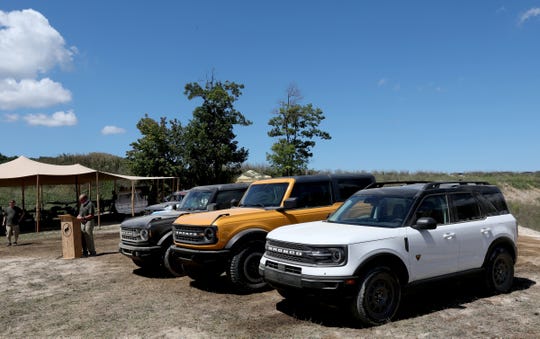 And now, no one outside of Ford knows exactly what the total is. A Ford spokesman declined to update the expectations-shattering figure.

Potential buyers who have gone online to ford.com and placed a reservation with a $100 refundable payment are the only people who may have access to the vehicles when they start getting delivered in spring 2021. While Ford will do its best to fill as many orders as possible in 2021, some customers may end up getting them in 2022.

Build and price just days away

In mid-October, Ford is planning to allow Bronco reservation-holders into the system and custom design their two-door or four-door Bronco. This is known as the build, price and spec process. Official orders will need to be placed by the end of January 2021 and at that point, buyers will select their dealer of choice.

During this process, the order program will suggest nearby dealers based on the zip code of the customer. In a twist, the customers will choose their dealers rather than the dealers getting a big inventory and inviting people to shop in the first year.

“Our dealers tell us they haven’t seen this level of enthusiasm for a new product since the original Mustang,” Said Deep, Ford spokesman, told the Free Press. “Due to the unprecedented level of interest, we plan to build customer orders only in the 2021 calendar year. We will continue to add new appearance and feature choices, including paint colors and special editions, for customers that have a longer wait.”

He urged patience, emphasizing that the company wants to get these vehicles into the hands of drivers “as soon as possible.”

In coming weeks, Deep said, “We will provide additional information to customers on the order process and delivery timing in the coming weeks.”

No one knows how may of these orders have been placed out of curiosity or whether they reflect real orders, which influences a complicated supply chain process that Ford must monitor.

While Ford CEO Jim Hackett has touted the orders and the popularity of the vehicle, Farley — who becomes CEO on Oct. 1 — told industry analysts that the company takes very seriously the situation and logistics involved.

For context, the highly popular Jeep Wrangler sold 228,042 in 2019. Farley has predicted the Bronco will fight for Wrangler buyers. 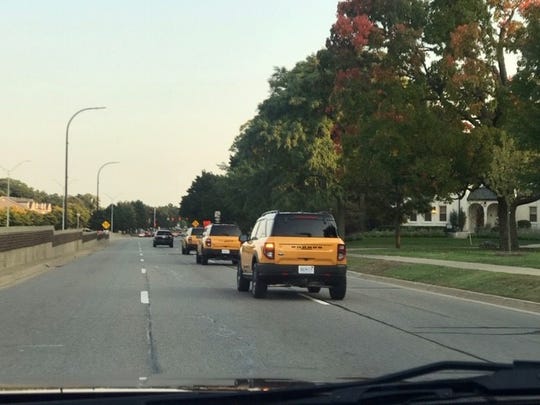 The all-new 2021 Ford Bronco Sport was sighted on Thursday, September 24, 2020 about 6:45 p.m. traveling southbound on Woodward Avenue south of I-696 in Pleasant Ridge. (Photo: Reilly Schaefer)

Ford told dealers in February, prior to the COVID-19 shutdown, it plans to sell an estimated 200,000 Bronco family vehicles in 2021, including the smaller Bronco Sport, which is made in Mexico and arrives in dealerships by December. The company did not break out Sport sales expectations.

Test units on the road

The company built its first preproduction Broncos Sept. 23 at the Michigan Assembly Plant in Wayne. The test units go through tooling trials and other rigorous tests to make sure any problems that could disrupt the manufacturing process are identified early.

These are essential test protocols that protect the company and the buyer. 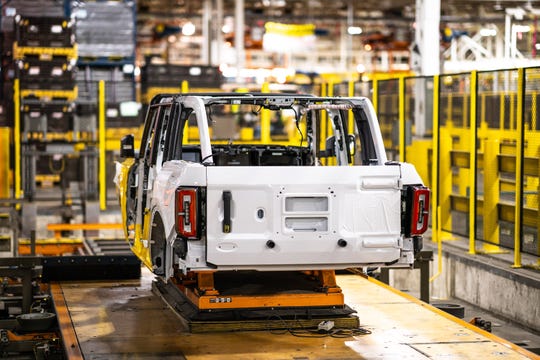 The first early pre-production 2021 Ford Bronco on the assembly line. This image was taken on Tuesday, September 22, 2020 at the Michigan Assembly Plant in Wayne, Michigan. (Photo: Bronco Nation)

Ford executives including Farley have said the Ford team learned lessons from the botched launch of the Ford Explorer and Lincoln Aviator, which was cited after a disappointing 2019 earnings report, and is taking care to prevent such hiccups in the future.

Analysts say the company is poised for greatness if all goes as planned.

“The bad is that this kind of serendipity, and the inevitable demand-versus-supply issues that come with it, has created a backlog of orders,” he said. “It puts Ford under a lot of pressure to deliver those orders ASAP. And Ford’s vehicle launch history, including recent history, is not stellar. Add in the redesigned Ford F-150 and there will be plenty of pressure on Ford’s production and distribution systems this fall.”

More: Fear of job loss, uncertainty stalls car buyers — so Ford came up with an idea

But that’s not all, Brauer warned.

“There’s a dicey component to intense interest in a vehicle — it can fade as quickly as it builds,” he said. “One or two launch delays, and a good chunk of that demand backlog can evaporate well before orders are filled. An exceptional product will be somewhat inoculated against this issue because early customers will tout its excellence, encouraging those waiting in line to keep waiting.”

Exotic, limited-production cars usually involve getting confirmation before an order is placed, analysts said. But this is a little different.

“Tesla is similar in that the backlog of demand for new models always outstrips supply, so you have to go to their site and place a reservation to get in the queue for a car,” Brauer said. “The new Ram TRX had a limited run for the first year and they sold out in three hours, months before production began.”

Then there are long-standing traditions of limited-edition version of cars, which have to be reserved and often sell out immediately. The $110,000 Lincoln Continental sold out in hours.

“An abundance of Bronco orders is a great problem for Ford to have,” said Michelle Krebs, executive analyst at Cox Automotive.

Tesla is already taking orders for the Cybertruck and it’s “not close” to delivery, Krebs noted. Tesla CEO Elon Musk has said he’s disappointed with 200,000 reservations.

“As is always the case even with Tesla, some people won’t follow through on their reservation. Still, the numbers are hefty. Early Bronco models undoubtedly will be top-of-the-line ones, which will generate significant revenue for Ford and solid margins for Ford dealers,” she said.

“Now Ford must launch the Bronco flawlessly,” Krebs said, “avoiding the production debacle it experienced with the Explorer.”

Lisa Drake, Ford chief operating officer, North America, emphasized that the company is on schedule with the Bronco Sport.

“For the Bronco, we are carefully planning with our employees at Michigan Assembly and our product and manufacturing teams for the launch next year of the all-new Bronco,” she said. “Our teams are just as excited as our customers to get started.”