It was not the first time that the baseless smear came out of the Trump camp. On Instagram in May, the president’s eldest son and campaign surrogate Donald Trump Jr. made a similar insinuation, which he later claimed was a joke.

QAnon is exploiting fears about the vulnerability of children and latching onto legitimate efforts to fight child abuse to push these allegations into everyday people’s social media feeds, said Michael Jensen, a senior researcher at the University of Maryland who leads a domestic radicalization team.

“Stories of child victimization are effective at mobilizing people to support a movement, even if it is based on conspiratorial views. We are seeing this now with QAnon’s use of the ‘Save the Children’ slogan, which has generated support from more mainstream individuals who do not necessarily subscribe to all aspects of the conspiracy,” Jensen said.

On the surface, #SaveTheChildren, which began as a fundraising campaign for the Save the Children charity, and a related hashtag #SaveOurChildren, don’t seem controversial. Who isn’t against child trafficking?

In recent months, millions have seen anti-child trafficking memes, according to data from CrowdTangle, a public insights tool owned by Facebook. Between June 1 and Sept. 24, there were nearly 5.3 million interactions with posts on public pages and in public groups on Facebook that mentioned #SaveTheChildren. Public posts on Instagram had about another 11.6 million interactions.

Melissa Ryan is CEO of CARD Strategies, a firm that helps organizations counter disinformation and extremism. Starting about six weeks ago, she began seeing members of her own family who had never mentioned child trafficking pipe up about it.

The phenomenon reminds her of rallies during the 2016 election for “Pizzagate,” a debunked conspiracy theory alleging that a secret cabal of elites operated a child sex trafficking ring out of a Washington, D.C., pizza restaurant. A North Carolina man traveled there and fired an assault weapon, endangering families and children.

“If you want to call someone you don’t like the worst possible thing, Satanic sex-trafficking baby molester fits the bill. There’s really nothing worse you can call someone. There is no redemption after that,” said University of Miami associate professor of political science Joseph Uscinski, co-author of “American Conspiracy Theories.” 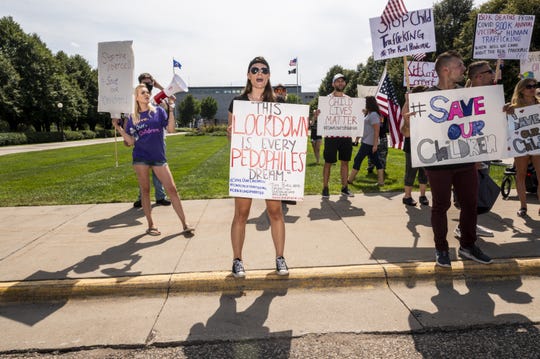 People march during a “Save the Children” rally outside the Capitol building on Aug. 22 in St Paul, Minnesota. Hundreds of rallies around the country, meant to decry human trafficking and pedophilia, were held, some of which have been linked to social media accounts promoting the QAnon conspiracy. (Photo: Stephen Maturen, Getty Images)

The list of those targeted by false claims they prey on children is lengthy and includes Tom Hanks, Chrissy Teigen, Oprah, Justin Bieber, Barack Obama and Biden’s running mate Kamala Harris. None of them has ever faced a hint of impropriety with a child.

“Right now we are living through extremely unstable and uncertain times and that tends to make people even more anxious to look for answers and to look for villains,” Olmsted said.

Crimes against children are the foundation of many conspiracy theories because they are so universally horrifying and can quickly explode into national obsessions, such as the disappearance of the Lindberg baby in the 1930s, the murder of JonBenét Ramsey in the 1990s and the sex-trafficking charges against convicted sex offender Jeffrey Epstein, says Emerson Brooking, resident fellow at the Atlantic Council’s Digital Forensic Research Lab. 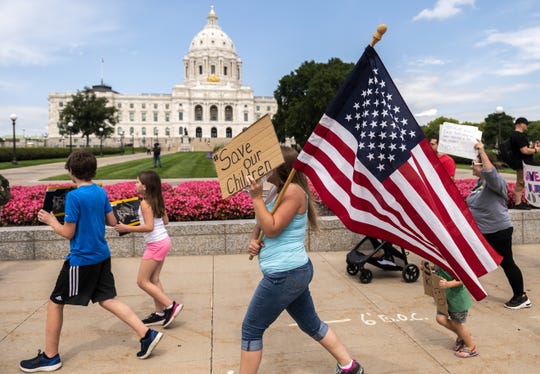 People march during a “Save the Children” rally outside the Capitol building on Aug. 22 in St Paul, Minnesota. (Photo: Stephen Maturen, Getty Images)

“The QAnon folks have gotten smarter about it, too, and are no longer using terms that would identify them as Q’s. And so this is going to continue to be complicated,” Facebook’s head of cybersecurity policy Nathaniel Gleicher told USA TODAY. “They in particular are an interesting target because they’re pretty savvy about how to present as a right-of-center organization without showing too much evidence of the fact that they’re also associated with some other efforts around Q.”