The founder of Nikola Motor Company is resigning from his position as executive chairman amid a federal investigation into the start-up’s claims about its technology.

Trevor Milton – who served as the charismatic public face of the Phoenix-based company, trumpeting its electric vehicle and hydrogen fuel cell technology and promoting a recent partnership with General Motors – is leaving the company effective immediately.

“Nikola is truly in my blood and always will be, and the focus should be on the Company and its world-changing mission, not me,” Milton said in a statement. “So I made the difficult decision to approach the Board and volunteer to step aside as Executive Chairman.”

His exit comes as Nikola is grappling with accusations first levied by an investment fund that the company misled the public about the nature of its progress, including the capability of its hydrogen semi-trucks and its battery systems. 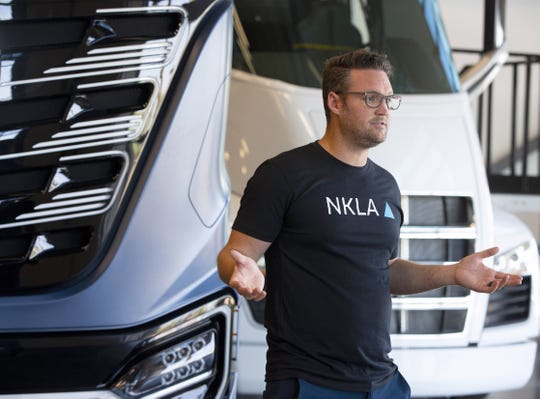 The Securities and Exchange Commission is investigating the matter after a recent report by Hindenburg Research accused Nikola of “intricate fraud” and singled out Milton for allegedly making false statements.

Nikola responded by saying the claims were “designed to provide a false impression to investors and to negatively manipulate the market in order to financially benefit short sellers, including Hindenburg itself.”

GM-Nikola partnership: If Nikola goes up in flames, GM might only get singed

Milton will relinquish 4.859 million shares of performance-based stock issued to him on Aug. 21 and will not receive a two-year, $10 million consulting fee he may have been eligible for upon his departure, according to an SEC filing.

Nikola recently announced a deal with GM that involves GM receiving an 11% stake in Nikola in exchange for providing manufacturing and engineering services for Nikola’s hydrogen and battery-powered vehicles.

In an interview with USA TODAY in late May, days before the company went public through a deal with a special purpose acquisition company, Milton acknowledged that some investors had been concerned about Nikola following public scrutiny over the rapid growth of real-estate brand WeWork.

“Everyone freaked out,” he said, that other startups “might be filed with fraud,” too.

But he said at Nikola, “we knew we had nothing to hide.” The company, he said, would be “the light in the darkness, it’s the hope in the despair, and it really is a company that’s going to clean the world up, clean the emissions up, rally investors.”

“Trevor stepping down voluntarily at Nikola will be perceived by the Street as a major near-term gut punch for the company’s lofty EV ambitions as he plays a key role strategically in driving the company’s vision,” Ives wrote. “While there will be a lot of worries on the Street around Trevor’s departure especially in light of the bear noise recently with the company, going forward Nikola has a strong bench and now it’s all about execution going forward with the GM partnership a linchpin to its success.”