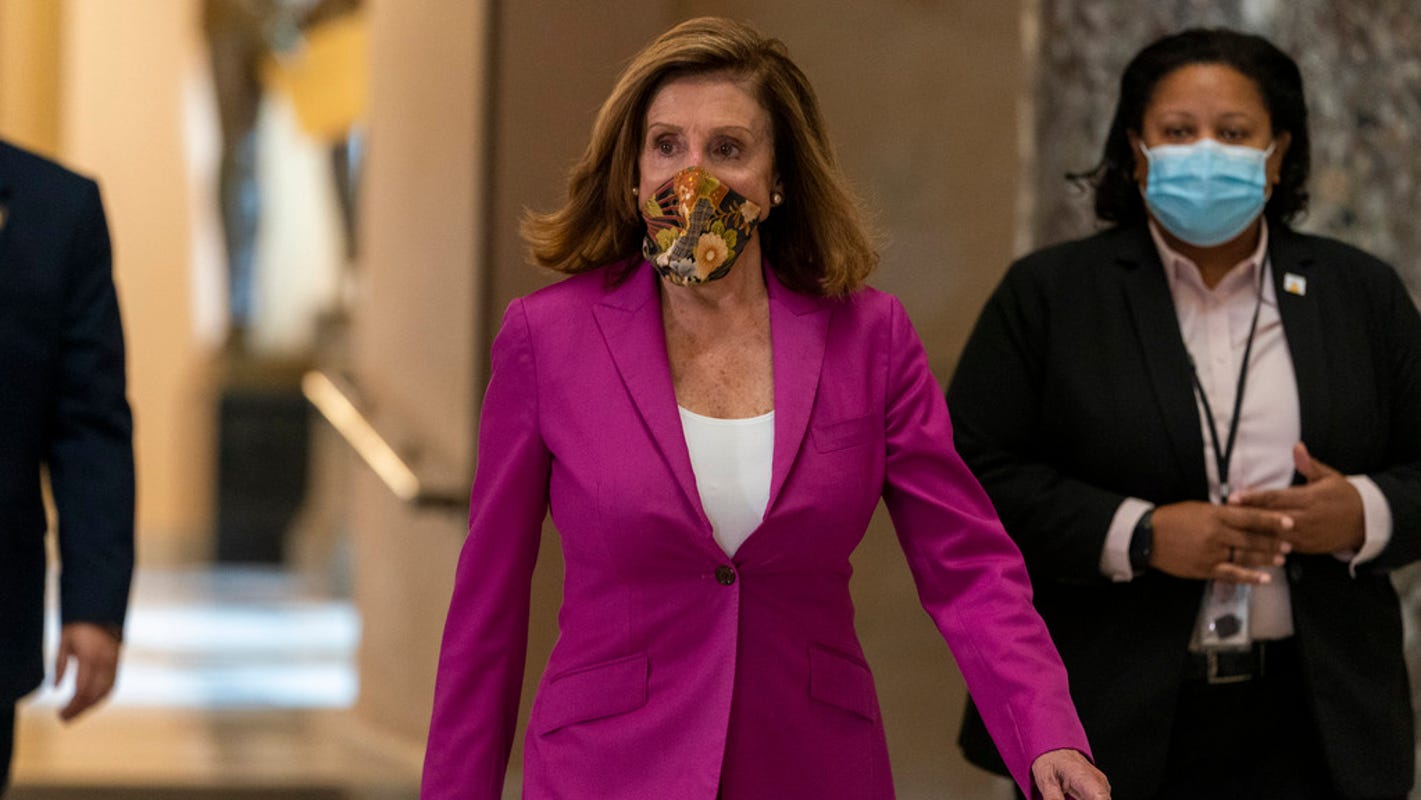 Pelosi says House will stay until deal on bill

US House Speaker Nancy Pelosi says global challenges such as the climate crisis and the coronavirus pandemic can only be solved with a “coordinated international response.” (Sept. 12)

WASHINGTON – House Speaker Nancy Pelosi said Tuesday the House will stay in session until a breakthrough is made on a coronavirus stimulus bill, while moderate lawmakers pressed leaders to come up with a relief deal before the November elections.

“We are committed to staying here until we have an agreement, an agreement that meets the needs of the American people,” Pelosi said on CNBC Tuesday.

Her words signaled relief talks between congressional Democrats and President Donald Trump’s White House may be salvaged even though the two sides don’t appear any closer to an agreement.

Pelosi hasn’t budged on her desire for a sweeping multi-trillion-dollar plan for aid to schools, the unemployed and cash-strapped local governments. And Republican leadership didn’t appear any more open to recent Democratic proposals on Tuesday.

“We’re willing to sit down with the Democrats and try to reach an agreement. Clearly, we’re not going to spend 3.4 trillion or 2.4 trillion or 2.2 trillion, which are the various numbers that the Speaker has laid out as potential,” Senate Majority Leader Mitch McConnell, R-Ky., told reporters at a weekly news conference. “I still hope we’ll be able to get there. It’s been disappointing that it’s taken this long. But there’s still a need.”

After passing a series of bills totaling to help blunt the impact of COVID-19, congressional leaders and the White House have so far been unable to find a new bipartisan compromise on another batch of aid for unemployed Americans, schools and businesses.

Top Democrats and White House negotiators spent weeks attempting to broker a deal, only leading to both sides digging in their heels and blaming one another for the prolonged impasse. Democrats have pushed for a bill topping $3 trillion, while Senate Republicans last week attempted to pass a slimmed-down bill that totaled about $300 billion.

The failed effort in the Senate left members of both parties expressing little hope coronavirus legislation would pass before the election.

Both chambers are only in session for several weeks before they again will go on a lengthy break in October ahead of the election, leaving little time to discuss COVID-19 relief and also take up must-pass legislation to avert a government shutdown.

While pressure is expected to remain on leadership to broker a deal, both sides have not expressed any willingness to alter the demands that have left them far apart.

Pelosi on Tuesday again argued for trillions of dollars in aid counter the impacts of the virus.

“A skinny deal is a Republican bill. That’s not a deal at all,” she argued. “They’re making a skinny – Chuck Schumer and I call it emaciated – proposal for a massive problem. We have to face that reality.”

Her pledge to keep the House is session, while a showing she is willing to continue talks, would not entail hundreds of House members staying in Washington until a deal is made. House Majority Leader Steny Hoyer, D-Md., told reporters that while the House would likely remain in session, members could go back to their districts and would be given notice to come back to the U.S. Capitol if a bill was to be voted on.

Pelosi and Treasury Secretary Steven Mnuchin, one of the lead White House negotiators, have continued to talk over the weeks about COVID-19 relief but the focus has also extended to passing spending bills to avert a government shutdown at the end of the month.

While some have floated the idea that coronavirus relief could be added to the spending proposals, leaders in the House and Senate have rejected the idea.

Moderates attempt to break the impasse

Attempting to break the logjam, groups of of moderate lawmakers in both parties, many of whom face tough re-election races this fall, have tried to push their parties’ leadership to get back to the bargaining table.

On Monday, Rep. Derek Kilmer, D-Wash., chairman of the moderate New Democrat Coalition, said he was pushing leadership to broker a deal before Congress goes on a recess in October.

“We want a deal that’s on a robust, comprehensive package,” he explained. “And barring that, we’d like the House to take some form of action on a COVID relief and recovery package. But we don’t want a meager package. We don’t want to accept a bad deal.”

More: Trump knew the coronavirus was ‘deadly stuff’ but chose to downplay it, according to recordings revealed in new Woodward book

Rep. Suzan DelBene, D-Wash., added that the push for a deal was not meant to “undermine the speaker’s negotiating position.”

The bipartisan Problem Solvers Caucus, a group of 50 moderate lawmakers on both sides of the aisle, also want leaders to find a compromise.

The Problem Solvers Caucus introduced its own $1.5 trillion framework for a relief package on Tuesday, though House Democratic leadership quickly poured cold water on the proposal.

Speaking outside the Capitol, Rep. Josh Gottheimer, D-N.J., a co-chair of the caucus whose district Trump won narrowly in 2016, said Americans could not wait for more aid while lawmakers played “political games.”

Lawmakers on both sides of the aisle denounced “brinkmanship” and partisan politics for holding up the passage of another relief bill.

“During a moment of crisis, our mission in Washington should be clear: help families stay safe and weather the storm of COVID-19,” said Rep. Elissa Slotkin, D-Mich., who also represents a district won by Trump. “But unfortunately, amidst election season, politics has distorted that mission.”

A joint statement from eight House committee chairs, all Democrats, said the Problem Solvers’ proposal “falls short of what is needed to save lives and boost the economy.” Their proposal “retreats” from policies passed by House Democrats in May and “fails to respond” to other issues that have emerged since then, the chairs said.

The group of lawmakers acknowledged their bill was not going to be the final version, nor was it even a perfect bill, but they hoped it would pressure both sides to return to the bargaining table.

Rep. Tom Reed, R-N.Y., another co-chair of the caucus, told reporters his group would “not step into the role of being the final negotiators on this package. That is left to our leadership…the Senate, the House, and the White House. But what we wanted to demonstrate is that it can be done.”

Their plan, among other provisions, would provide $500 billion in state and local funding, another round of $1,200 stimulus checks, and a renewed boost to unemployment benefits of $450 a week for eight weeks, then up to $600 a week through January 2021.

The plan Senate Republicans attempted to pass last week did not include the stimulus checks and had smaller amounts of money for unemployment benefits and state and local funding.

“I think the Problem Solvers are lower than would be a responsible deal, but I think their ideas are useful,” he said, making clear that the contents of the bill “certainly do not represent a Democratic offer.”

Moderate lawmakers did not seem to mind the dismissal from party leaders.

“We do not have allegiance to our party leaders. That’s not why we’re here,” said Rep. Max Rose, D-N.Y., who faces a tough race this fall in a district Trump won by 10 points in 2016.

The White House, however, appeared intrigued by the proposal. White House Chief of Staff Mark Meadows, who had been one of the lead White House negotiators, told Politico the Problem Solvers’ proposal, while “inconsistent” with the initial White House proposal, “could provide a basis for further conversation with the speaker and leader in the Senate.”