No one will ever need to worry about rust on this highly valuable muscle car.

For collectors and racers who wish to re-create the best of the past, well, it’s happening.

The carbon fiber Shelby GT500CR Mustang concept car has officially gone into production as of Thursday. Only 25 of the vehicles will be made per year, at a starting price of $298,000 each. Designers will take 12 to 18 months to assemble the made-to-order classic known for its speed and design. 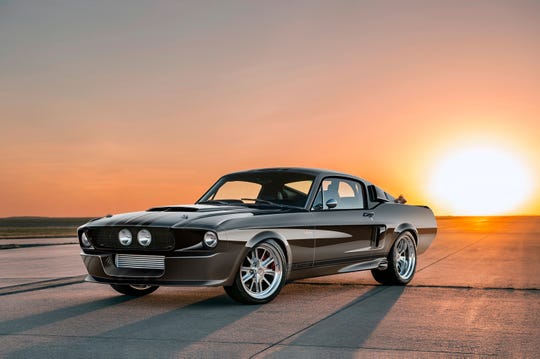 Classic Recreations has moved the 1967 Shelby GT500CR from a carbon fiber concept car into production. It starts at $298,000. The car will be powered by a Stage 2 Whipple supercharged Ford 5.0L Coyote engine mated to a Tremec six-speed manual transmission. (Photo: Classic Recreations)

‘Payroll Tax Holiday’: Here’s why many employers are passing it up

“This is like taking a 1960s muscle car to NASA and having the space program bring it into the 21st century,” Jason Engel, co-owner and lead designer of the company crafting the cars, Dallas-based Classic Recreations, told the Free Press.

Never before has a Shelby Mustang been made of carbon fiber, the material that’s used to make spacecraft, airplanes, sailboat masts and even outrigger canoes. Carbon fiber is known for its high strength, low weight and temperature tolerance.

Buyers of these kinds of vehicles  traditionally have been mostly male entrepreneurs, pro-athletes and car collectors, Engel said.

Women who collect tend to be CEO-types, he said. “One of them I sold to in the past, from a famous shoe company you’ve seen in many stores, I can’t mention the brand, she was super awesome. Another woman won the lottery.”

This car is now available to order and already attracting serious interest.

One new buyer for the Shelby GT500CR is an engineer who works in research and development, and he likes to “track cars” with his business partners, said Bryan Stone, a partner in Classic Recreations.

“So he wants a high performance carbon fiber vehicle over 1000 horsepower. That customer has specified that he wants to be sure when he goes into a sustained turn on the racetrack, which increases the G-force, that oil would not crawl away from the oil sump.”

The company building the reborn Shelby has an agreement with Ford Motor Co. and Carroll Shelby Licensing to build Shelby edition Mustang restorations. The vehicles come with a Shelby serial number and is listed on the Shelby Registry. To be clear, each car begins with the original chassis from a 1967 or 1968 Ford Mustang using the original Vehicle Identification Number (VIN). They’ll have the original VIN and a separate Shelby serial number.

Classic Recreations has moved the 1967 Shelby GT500CR from a carbon fiber concept car into production reality with only 25 made each year at a starting cost of $298,000. It has an original VIN. (Photo: Classic Recreations)

While some people buy the cars as high-performance showpieces, adding perhaps 300 or 400 miles only, others absolutely take them to the track, said Engel, 46, of Oklahoma City, who works at the original site of the company.

As the son of a car dealer in Oklahoma and Las Vegas, Engel has been eating, sleeping and breathing cars his entire life. He has owned probably 150 vehicles since age 15.

From dream to reality

Designers initially planned to simply make the vehicles more efficient and it turned into “Oh, my God, what do we have here,” Stone told the Free Press.

Each piece of the carbon fiber Shelby GT500CR is essentially flawless because it’s designed and modified with CAD — computer-aided design, Engel said. “When you build something by hand, it’s virtually impossible to be identical. This whole car is digitally scanned, and a designer went in and perfected the entire car, front to rear. Everything is perfect.”

It’s really a celebration of the legacy of the legendary Carroll Shelby.

Eight years after his death, he remains revered for his passion to sacrifice everything to pursue his dream of designing and building and racing cars. Shelby is synonymous with innovation and quality.

“He won Le Mans. The 1967 GT500 is still today the most sought after muscle car,” Engel said. “Even in new cars, in new Mustangs, you see Carroll’s designs.”

Mainstream moviegoers discovered his brilliance with “Ford v Ferrari,” the Oscar-nominated blockbuster that featured the story of Shelby and British race car driver Ken Miles in their fight against Enzo Ferrari at the 24 Hours of Le Mans in France in 1966.

The iconic 1967 Shelby GT500 is reimagined with “a powerful contemporary engine, upgraded suspension, better braking systems” and the latest technology, the company said in a news release. Original Shelby molds reproduce the lines of the 1967-68 Shelby.

“The result is stunning perfection in a car that is an astounding 600 pounds lighter than stock,” Engel said in the news release. “The power-to-weight ratio is on par with the most exotic vehicles, making it a modern world-class supercar with American muscle at its soul.”

Sean Kiernan, of Nashville, makes a stop in Michigan to show off family’s original Bullitt Mustang during world tour

A hand-painted, limited edition model exterior stripe can be any color a customer chooses, while the body of the car will be treated with clear coat to show its carbon weave patterns. Custom options include painting the vehicle —  Wimbledon White and Ebony are popular colors for muscle cars.

The purchase price includes closed-trailer transportation of the car to Las Vegas, a client “experience” that includes a night at a luxury hotel, a private tour of Shelby American and a photo with the vehicle. A donation in the customer’s honor will be made to the Carroll Shelby Foundation, which benefits children medically and educationally.