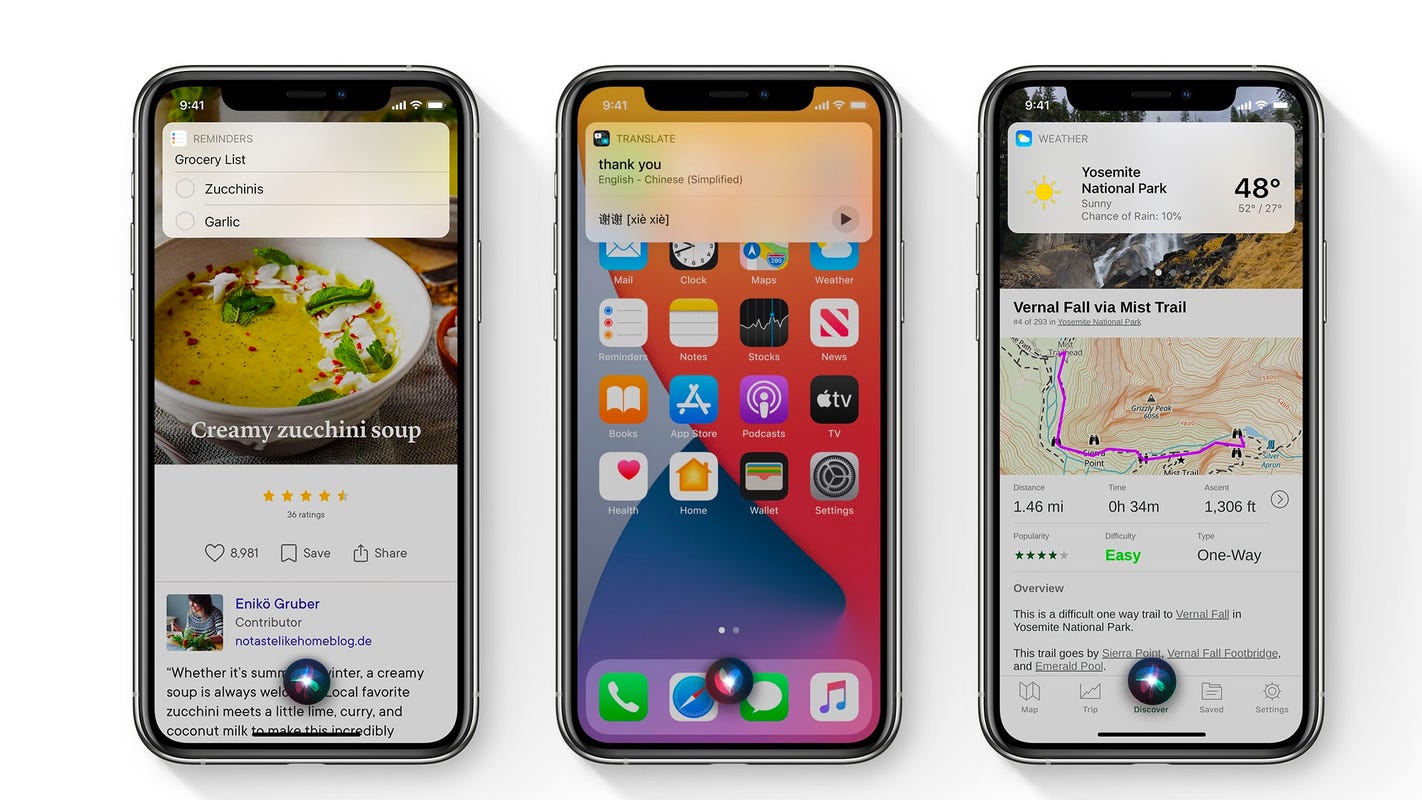 Apple will stage its traditional post-Labor Day product reveal on Tuesday, where it is expected to tout new editions of the Apple Watch and iPad.

Along the way, there will be new things for Siri to do as well on the iPad, as part of the iOS mobile operating system upgrade. Siri is the oft-maligned but heavily used personal assistant.

This year, Siri will tout a “completely new look,” with “over 20x more facts than just three years ago.” Yes, Apple actually says this, on the promo page for the iOS 14 upgrade, which has traditionally been made available in September. (We first met Siri way back in October 2011, on the iPhone 4S.)

I downloaded iOS14 this week from Apple’s Beta site to give it a spin and engage in that great parlor game of asking Siri (and Alexa and the Google Assistant) multiple questions, to see if I could stump her.

Bottom line: Yeah, I’d say Siri actually answered questions about 20% more satisfyingly than it did the last time I played this game. And it has a nice new cosmetic look. But it still lags its competitors in many key places.

In my tests, I got fewer of the “Here’s what I found on the Web” cop-out answers (ones Google and Amazon could read back to me, but Siri wouldn’t) and some new features, most notably, the ability to dictate a text and have your audio version in someone’s inbox instead of just written words.

But it’s the new and improved real audio answers and fewer links to go look at online myself that I find refreshing,

Questions I posed in 2018 that Siri couldn’t answer: “How to say ‘hello’ in Japanese,” and “Where can I get my car fixed locally?” were given back to me with flying colors, without “Here’s what I found on the web.”

In the case of the car, it sent to me a Firestone facility 0.5 miles from my house and offered to call or give me directions. Great.

However, one new addition is that Siri works over the phone or tablet, so if you’re doing a search for the Tom Collins and looking at a webpage that lists the ingredients, you can say, “Hey Siri, remind me to get lemon juice and gin,” and add it as a reminder.

Siri this year “lets you quickly get information or get things done while still focusing on what you’re doing,” per Apple, and still does really well with the basics, such as finding the nearest gas station, reporting upcoming weather, setting appointments and the like.

Old Siri with a dark background that takes over your screen (Photo: Apple)

Overall, Siri will see “cosmetic changes,” to make it look more user-friendly, with little boxes that add a visual to the audio, says Bret Kinsella, the editor of the Voicebot.ai blog, which is devoted to voice computing. “Apple has fewer features for Siri than the others, and this is a way to catch up.”

When Apple first introduced Siri as a feature on the then-new iPhone 4S, it began as a laughing stock – Forbes calls it an “ugly stepchild” – because it got so much wrong. But  over time it developed into a respectable assistant that worked well if you come to it with managed expectations. Siri receives over 25 billion requests daily, per Apple.

Meanwhile, rivals Amazon and Google invested heavily in voice computing technology and ran with it. In a late 2019 survey, Loup Ventures found that Google Assistant answered 800 questions correctly 92.9 percent of the time, compared to 83.1 percent for Siri and Alexa 79.8 percent of the time.

You can ask Siri to add things as reminders from within webpages in the new iOS14 (Photo: Apple)

I like the new look. The boxes of information instead of a dark screen is prettier to look at. But Apple still needs to spend more time answering questions via audio and less time sending me elsewhere to look up websites.

But Hey Siri, I’ll give you this: The new version is a step in the right direction.

In other tech news this week.

Microsoft will release a new edition of the Xbox on Nov. 10. Priced at $299, the Xbox Series S console is expected to launch in tandem with the flagship Xbox Series X system, for which Microsoft has not yet announced a release date or price. The Xbox Series S will play new games timed to the new consoles’ release, but rely on downloaded games as it will not have a Blu-Ray Disc drive.

Russian hackers still at it for the 2020 presidential campaign. The same Russian military intelligence outfit that hacked the Democrats in 2016 has attempted similar intrusions into the computer systems of more than 200 organizations including political parties and consultants, Microsoft said. Those efforts reflect a broader increase in targeting of U.S. political campaigns and related groups, the company said.

Touchscreen devices for the COVID era. John Lamb from ELO talks about the rise in popularity of touchscreen kiosks at stores for helping to eliminate person to person contact.

Preview Apple’s Tuesday event with no iPhone.  Instead it’s all about the iPad and Apple Watch.

How to make free calls with Alexa and Google Assistant.

My take on the new Siri.