Wisconsin residents receiving an extra $300 in weekly unemployment benefits are being asked to pay back the money if Congress enacts new legislation to replace the jobless aid created by President Trump’s executive action last month.

Labor and unemployment experts worry that this could leave many out-of-work Americans confused about what to do at a time when the money ordered by Trump has already been delayed and Congress has failed to pass a new aid package for jobless Americans.

If Republicans and Democrats do agree to new aid in the future, unemployed people who take the federal benefit could be seen as double-dipping: They would receive retroactive pay from the new legislation even though they already been paid through Trump’s executive action.

“All of this confusion just makes for more administrative burdens at a time when people are going longer without benefits, living standards are declining and poverty is rising after millions lost their jobs through no fault of their own from the pandemic,” says Heidi Shierholz, senior economist and director of policy at the left-leaning Economic Policy Institute. 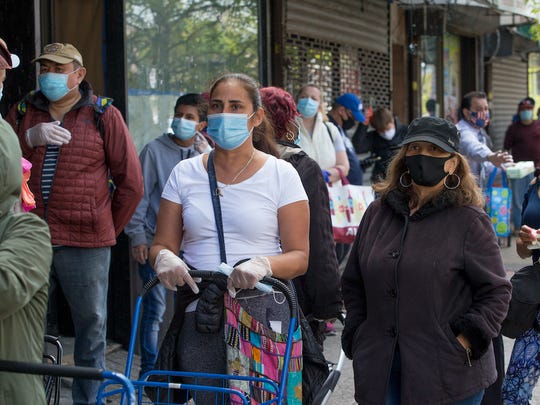 The COVID-19 pandemic has ushered in an unemployment crisis on a scale not seen in modern U.S. history. (Photo: Photo by Andrew Lichtenstein / Corbis via Getty Images)

A spokesman from the Wisconsin Department of Workforce Development said the state is following guidance from the Federal Emergency Management Agency, which is administering Trump’s Lost Wages Assistance program, and the Department of Labor. FEMA, however, said that states administer the program while the agency provides the funds.

The Louisiana Workforce Commission said it will monitor legislation from Congress, and added that it would ensure that any future guidelines are met as provided from the Department of Labor.

The $300 weekly benefit is retroactive to Aug. 1 for workers who qualify. Wisconsin’s DWD doesn’t anticipate that it will be forced to claw back the aid from claimants, although its own website posted the warning to out-of-work residents who tried to file unemployment claims.

It remains unclear whether future aid from Congress will be made retroactive to Aug. 1, meaning the payments would overlap, a spokesman said.

The DWD is anticipating that if Congress passes new legislation, it will begin once Trump’s Lost Wages Assistance program lapses for the week ended Sept. 5 so that there would be no overlap, they added. 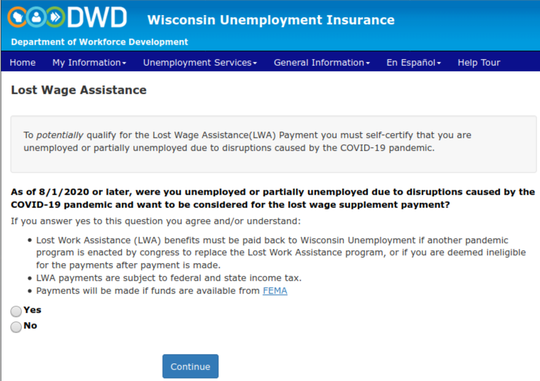 Still, a potential overpayment issue threatens to create problems in other states beyond Wisconsin if Congress allows retroactive payments to overlap, experts say. States could face a reckoning over how to recover the money if people were overpaid, they warned.

“There’s a high chance that Congress could backdate a new relief program, creating problems for states that already distributed money from the Lost Wages Assistance program,” says Andrew Stettner, an unemployment expert and senior fellow at The Century Foundation, a think tank.

“If Congress doesn’t address this in a new relief package, there would be an overpayment situation for many jobless Americans across the country that would need to be resolved,” he added. 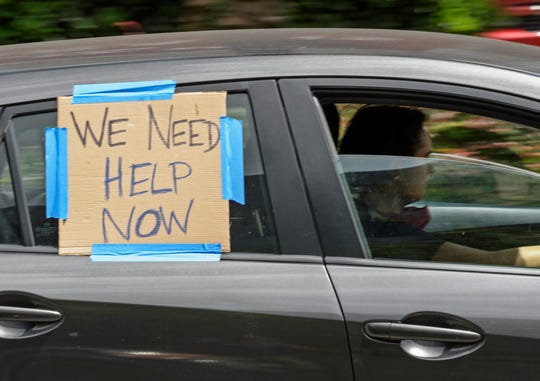 Michele Evermore, senior researcher and policy analyst with the National Employment Law Project, was concerned that something like this could happen as states rushed to get Trump’s Lost Wages Assistance program up and running when it was enacted in August. The program replaces the $600 federal unemployment supplement that expired in late July.

“This would be nightmarish for jobless Americans and state unemployment systems alike if people are forced to return the money,” says Evermore. “Wisconsin isn’t necessarily in the wrong for sharing a disclaimer. It’s worth letting people know that this temporary benefit is uncertain.”

In August, President Trump called for a $300-per-week federally-funded jobless benefit for workers who were unemployed due to the pandemic after coronavirus aid talks stalled in Congress.

Trump directed FEMA to run the $300-per-week relief program through its Disaster Relief Fund, which would be capped at $44 billion. It was supposed to last until December. But experts estimate that states will exhaust the funds after about five or six weeks, threatening to leave out-of-work Americans without the additional aid within a matter of weeks after Congress failed to pass another aid package this month.

And some states including Arizona, Missouri and Montana have already exhausted the funds. And Texas said Wednesday that the disbursement of the extra $300 would expire for the week ended Sept. 5.

The latest failed attempt to strike a deal in Washington may have been the last opportunity for lawmakers to reach an accord on a stimulus bill before the election in November.

“Some people can’t cover their basic needs on regular state benefits. It’s only going to get harder until the economy recovers,” says Stettner. “People may be forced to make more drastic decisions by either raiding their 401(k)s or selling their homes, creating a bigger inequality divide in America.” 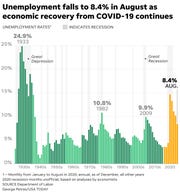 Nearly all states except for South Dakota have applied for funds through FEMA. So far, at least 22 of them have begun disbursing the money.

States can’t normally pay unemployment insurance that isn’t authorized by Congress. So they have been forced to reconfigure their systems to distribute the funds, resulting in long delays.

Wisconsin, for instance, was approved to provide an additional $300 a week in federal aid for three weeks to those receiving unemployment due to lost wages from the pandemic. And additional weeks of funding will be determined on a weekly basis afterward.

But the state warned last week that it could take eight weeks to reprogram the state’s unemployment system to disburse the funds.

Guidance from the U.S. Department of Labor shows that the Lost Wages Assistance program from the Trump administration must end if Congress passes new legislation providing supplementary unemployment benefits, including extending the Federal Pandemic Unemployment Compensation program that expired in July.

Still, the question of whether people must return the money provided by Trump’s program can’t be answered until new legislation provides guidance, according to the Department of Labor.

Essentially, the federal government is saying it has yet to determine how possible overpayments through the program will be repaid. That has left the door open for states like Wisconsin to interpret how to recoup the money, according to Victor Forberger, a Wisconsin-based labor and employment attorney who specializes in unemployment cases.

“Wisconsin has made an administrative interpretation as opposed to what the law allows,” argues Forberger, who added that the state is “very aggressive” when it comes to recouping overpayments.

To be sure, it’s possible that Wisconsin could be overstepping its authority, some experts argue, since there’s nothing in the current declaration that would allow states to require people to pay back the Loss Wages Assistance.

“FEMA provides the funding, the states administer the program,” FEMA told USA TODAY in an emailed statement. “FEMA cannot estimate if people will be eligible or ineligible to receive Lost Wages Assistance. Eligibility determinations are made at the state level.”

How people could return the funds

It’s unclear how people would pay back the money, but there are a couple of ways it could happen.

If Congress passes a new enhanced unemployment program, people could have their retroactive federal payments reduced to cover overpayments, says Shierholz. Or they could get paid in full under the new program but have to pay back what they owe, she added.