The sharp sell-off that began last Thursday erased roughly 7% from the S&P 500 through Tuesday. On Wednesday, the broad index bounced back and rallied 2%, its best day since June 5. It recovered a little more than a quarter of its losses from the prior three days.

Still to be determined is whether the sell-off was tech stocks taking a breather after a historic run, or if it was the beginning of a more widespread downturn. Experts, however, expect to see volatility pick up in the coming months.

“Much like there was no real reason for the drop the past three days, there was no main driver for Wednesday’s huge rally, other than stocks were quite oversold,” Burt White, chief investment officer at LPL Financial, said in a note. “As the election nears, we could see this continued volatility continue.”

Record run: How did the stock market hit a record amid COVID-19-fueled recession? Here’s what experts say about the rebound

To be sure, the S&P 500, the broadest measure of U.S. stocks and the index used as a benchmark for index funds, has advanced 52% from its March 23 low and is sitting 5.1% from its Sept. 2 record high. The index is up 5.2% this year and remains above its prior record in February before the coronavirus-fueled selloff began.

The Nasdaq Composite, which houses many technology stocks that led the market’s remarkable five-month comeback from its lows in March, briefly lost more than 10% through Tuesday after setting an all-time high last week — a decline known in the market as a correction. The three-day rout was the fastest such pullback on record, according to LPL Financial.

On Wednesday, the tech-laden index rallied 2.7%, its best one-day gain since April 29.

So could stocks face another bout of turbulence in the coming months, or be headed for another sharp downturn? 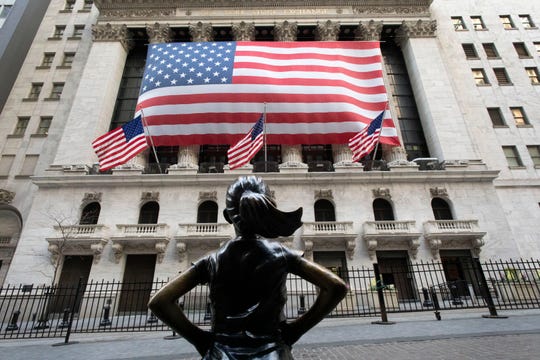 What drove stocks to records?

The stock market staged a stunning turnaround to all-time highs last month, propelled by Big Tech as trillions of dollars in stimulus aid from the Federal Reserve and Congress helped prop up an American economy gripped by recession.

Hopes for a potential COVID-19 vaccine also helped the S&P 500 erase all of its nearly 34% loss from earlier in the pandemic.

The stock market rebounded to records at a time when the U.S. economy is in one of the sharpest economic downturns since the Great Depression. Still, corporate profit reports for the spring that weren’t as disastrous as expected also helped lift the market.

That’s largely been helped in part by high-flying stocks like Apple, Microsoft and Google parent Alphabet, which have powered this year’s rally, far outpacing the rest of the market as investors bet heavily they could prevail in a stay-at-home economy.

Big Tech makes up an outsize portion of the S&P 500, and the performance of the biggest stocks can have a disproportionate effect on the index. The five biggest U.S. companies — Apple, Microsoft, Amazon, Alphabet and Facebook — make up about 25% of the S&P 500.

Much of the pain over the past few trading sessions has been concentrated in the names that drove much of the recent rally, as the six largest technology names including Apple, Microsoft, Amazon, Alphabet, Facebook and Tesla shed $1 trillion over the three-day selloff.

Between March 23 and Sept. 2, the Nasdaq jumped 75% while outpacing the S&P 500′s 60% gain and the Dow industrials’ 56.5% rally during the stock market’s rebound from its pandemic lows. During the run, Apple became the first $2 trillion U.S. company and Zoom itself became worth more than General Motors and Ford combined.

Last week, Apple and Tesla split their shares, making their shares more affordable as millions of Americans are scooping up stocks for the first time on trading apps such as Robinhood.

But for some investors, the price of tech stocks was too high compared with the earnings they were generating. Other industries didn’t get as expensive as technology during the recent run-up. Banks and other financial stocks in the S&P 500 are still down more than 19% for 2020 so far, for example.

“The latest pullback is healthy. There was a little too much hysteria,” says Bryan Lee, chief investment officer at Blue Zone Wealth Advisors. “The stock market has had a strong recovery, but to a certain extent, it’s been a bifurcated market, led by technology. Now we’re starting to see a broader recovery in other beaten-down sectors.”

What risks lie ahead?

The stock market pullback came on the heels of a historic run, with the Dow and S&P 500 both notching in their best August in more than 30 years. But stocks could face pressure since September is historically one of the weakest months for the market.

Still, stocks could notch more gains in the coming months, analysts say. One key reason: Investors are betting that the pandemic will end eventually with a vaccine. But any setback in the timeline for developing it could challenge the stock market’s rebound, experts caution.

With the U.S. presidential election less than three months away, some investors remain cautious due to economic policy uncertainty. Renewed trade tensions between the U.S. and China have added to those concerns after both countries reached a deal in January that brought a truce in a tariff war.

Investors are also waiting for more economic aid after unemployment benefits and other stimulus that Congress passed earlier expired. Investors say such stimulus is critical to the economy, but partisan disagreements have Congress at an apparent impasse.

A Senate vote this week on a trimmed-down relief package proposed by Republicans has only a slim chance of passage as Democrats insist on more sweeping aid.

“Retirement accounts are long-term investments, and investors can make mistakes when they try to make short-term predictions,” says Jeff Bush, managing partner at Informed Family Financial Services, a financial advisor in Norristown, Pennsylvania. “Investors are rewarded for their time in the market. Not timing the market.”