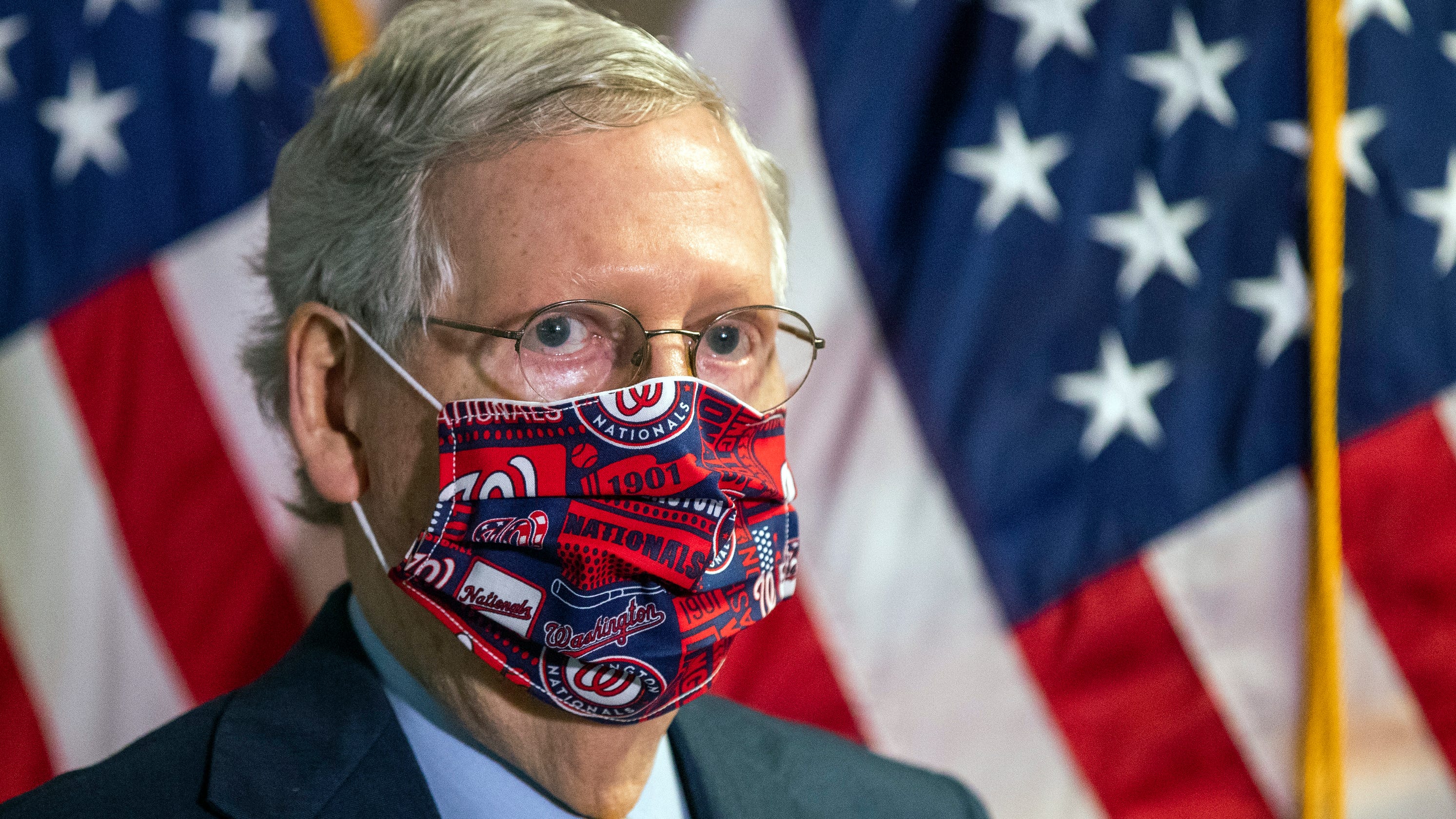 WASHINGTON – Senate Republicans on Tuesday unveiled a coronavirus relief plan far smaller than what lawmakers on both sides of the aisle spent weeks arguing over. It’s a bill that even Senate Majority Leader Mitch McConnell says isn’t perfect.

The proposal faces an uphill battle to becoming law as Democrats instantly vowed to block what they called a political ploy to help endangered Republicans in November and not meet the needs of American families and businesses.

What does it include?

What does it leave out?

But the measure doesn’t include many top priorities for Democrats — who passed a massive $3 trillion bill in May. It does not include more funding for state and local governments that have seen budget shortcomings, including some that are planning to furlough workers. The measure also does not include another round of stimulus checks for Americans.

Senate Majority Leader Mitch McConnell, R-Ky., said an initial vote on the measure would happen Thursday – during Congress’ first week back in town from a month-long recess – though he did acknowledge the bill is not perfect and doesn’t contain polices sought by members of both parties.

“It’s not a sweeping, multi-trillion dollar plan to rebuild the entire country,” McConnell said about the bill on the Senate floor Tuesday afternoon. “It does not contain every single relief policy that Republicans, ourselves, think would help in the short-term. I’m confident the Democrats would feel the same way but the American people don’t need us to keep arguing over what might be perfect. They need us to actually make a law.”

Why Democrats won’t support the bill

House Speaker Nancy Pelosi, D-Calif., and Senate Minority Leader Chuck Schumer, D-N.Y., bashed the bill and vowed to block it before the text of the proposal had even been released, calling it an “emaciated bill” with “poison pills Republicans know Democrats would never support.”

“As they scramble to make up for this historic mistake, Senate Republicans appear dead-set on another bill which doesn’t come close to addressing the problems and is headed nowhere,” the leaders said in a statement. “This emaciated bill is only intended to help vulnerable Republican Senators by giving them a ‘check the box’ vote to maintain the appearance that they’re not held hostage by their extreme right-wing that doesn’t want to spend a nickel to help people.”

The legislation will need 51 Senate votes to move forward, meaning McConnell can only lose a few Republican votes if no Democrats vote in favor of it. Republicans spent part of the August recess attempting to craft a bill that would garner enough support from their own party to pass the chamber.

“It does not contain every idea our party likes,” McConnell said of the bill. “Yet Republicans believe the many serious differences between our two parties should not stand in the way of agreeing where we can agree and making law that helps our nation.”

Negotiations on relief to this point

Pelosi and Schumer spent weeks negotiating with the White House on another coronavirus stimulus package. But talks dissolved as Congress went on a month-long recess over August with both sides blaming the other as millions of Americans saw bolstered unemployment benefits run dry and a small-business loan program stop.

House Democrats passed a $3 trillion COVID-19 measure in May that was roundly rejected by Republicans. Throughout negotiations, Democrats agreed to lower the overall price tag on their bill by $1 trillion but still talks dissolved.

McConnell refused to bring the bill up, calling it a liberal wish list. Instead, he unveiled a $1 trillion measure in July that did not have the backing of many in his own conference. The bill never came to the Senate floor for a vote.

Pandemic relief in an election year

The impasse has left lawmakers in key battleground states and districts in a difficult position. More than 100 House Democrats wrote a letter to Pelosi and House Majority Leader Steny Hoyer, D-Md., urging the leaders to schedule a vote to continue a $600 bolstered unemployment benefit that expired at the end of July.

Republicans, who are facing an increasingly tough battle to keep their Senate majority, could also face political ramifications over the deadlock. The bill released Tuesday and the likely Democratic opposition could help Republicans argue ahead of November that they are fighting for more relief for Americans.