General Motors is taking a stake in electric vehicle maker Nikola Corp. in a deal that will eventually deliver $4 billion in benefits to GM as it commercializes its EV technology.

The partnership, which is a 10-year agreement, will ultimately reduce costs for each company as GM pursues its all-electric vehicle strategy.

The deal announced Tuesday allows Nikola to exchange $2 billion in newly issued stock for services and access to GM’s parts and components. Nikola has yet to make any of the heavy-duty hydrogen fuel cell trucks it is developing. GM also has the right to nominate one board director at Nikola.

GM will “engineer, homologate, validate and manufacture the Nikola Badger battery electric and fuel cell versions,” the companies said in a statement. The Badger is a fuel-cell electric pickup expected to go into production by the end of 2022.

Barra said using GM’s electrified technology in the heavy-duty class of commercial vehicles is an important step in fulfilling its vision of an all-electric future.

GM on the move

GM is not announcing yet which plant will assemble the Badger for Nikola or if it will be built by UAW workers.

GM is investing $2.2 billion to retool its plant on the border of Detroit and Hamtramck, Michigan, to make all-electric vehicles including the GMC Hummer pickup, due out ahead of the Badger, by the end of next year. But Barra said she is not concerned about overlapping sales between the Hummer and the Badger.

“There’s going to be plenty of opportunity and different desires for different product, so there’s room for the Badger and the GMC Hummer and other products we put into the marketplace from an EV perspective,” Barra said during a conference call. “This does validate our technology; this is the second company to choose our technology over others. It gives us scale and efficiencies to drive cost down.”

She added that the semi-truck market is a wide opportunity for GM.

This news comes five days after GM said it had a deal with Honda to share vehicle platforms and technology in North America starting next year. The two have signed a nonbinding memorandum of understanding to establish a North American automotive alliance.

GM currently sells just one EV in the United States: the Chevrolet Bolt, built in its Orion Assembly plant in Lake Orion. But GM is spending $3 billion a year to develop more than 20 electric models that it will launch by 2023. Those include the Cadillac Lyriq SUV and a GMC Hummer pickup, both to debut late next year. GM is retooling its Detroit-Hamtramck Plant to assemble the electric cars. 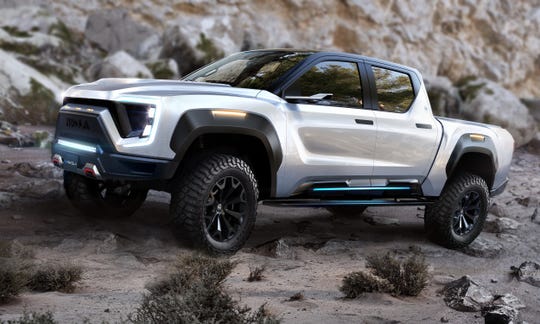 “In terms of the big picture, GM is on the move, putting together strategic alliances — last week with Honda and now with Nikola — to build a company that can better meet the demands of today while investing in the future,” said Michelle Krebs, executive analyst for Autotrader. “GM has invested heavily in its new battery technology, which can proliferate through Honda and Nikola. High volumes promise to bring down the costs, one of the keys in gaining wider consumer acceptance.”

This move also sets Nikola up to better compete with Tesla and Rivian and it allows GM a foothold in the space given Ford Motor Co.’s alliance with Rivian. Tesla will have the Cybertruck electric pickup. Rivian is developing the R1T pickup, which goes into production in 2021.

Ford and Rivian recently put plans to jointly develop a Lincoln-brand EV on hold, though they remain partners.

Barra said GM is “open to consider additional deals” involving its EV technology. In this deal, GM will start with work on the electric pickup, the Nikola Badger, but carry through with other EVs such as Nikola Tre, Nikola One and Nikola Two electric semi-trucks as well as the NZT, a personal watercraft vehicle.

As previously reported, GM has partnered with LG Chem to make the batteries at an Ohio plant near its former Lordstown Assembly facility, which will eventually create over 1,000 jobs in that area. That plant is to be called Ultium Cells LLC.

The deal with Nikola is likely a result of GM’s failed negotiations with Rivian, negotiations in which GM was rumored to want too much control, said Morningstar Analyst David Whiston.

“What’s interesting to me is both Rivian and Nikola make a battery-electric pickup truck, which is the Detroit Three’s dominant profit center,” Whiston said.  “Now GM will be making a, albeit likely low volume, pickup truck competitor.”

Nikola will use GM’s proprietary Ultium battery system and Hydrotec fuel cell technology, the systems that propel GM’s EVs, in the Badger and other vehicles.

Nikola Founder and Executive Chairman Trevor Milton said Nikola not only gets access to GM’s “production-ready” technology, but also its supplier network and manufacturing experience.

GM will also use its fuel cell technology on the commercial semi-truck market, where fuel cells will become increasingly important because they are more efficient than gas or diesel. GM said it sees additional growth opportunities in multiple transportation, stationary and mobile-power end markets.

Initially, Nikola had designed the Badger from the ground up, including the powertrain, Milton said in a conference call.

“But when we started talking to GM, we realized we were both building similar things and the cost would be tremendous for both of us if we do it separately,” Milton said.

Nikola will be responsible for the sales and marketing for the Badger and will retain the Nikola Badger brand. But GM and Nikola will share the components and chassis, bringing down production costs.

Nikola is building a factory near Phoenix, Arizona, to assemble its semitrucks. The deal with GM will save it billions on building a separate factory to make the Badger, Milton said.

Nikola will build “tens of thousands” of Badgers per year, Milton said, adding that he will provide a more specific figure as it gets closer to production.

“Our market is really focused on the person who is taking their family out camping and construction workers — it’s like a 1500-sized truck, but a little bigger than that with a lot of power,” Milton said.