Amazon is soft-launching a new supermarket Thursday, with a shopping cart that tallies up items as it enters the basket and enables instant checkout, and Alexa stations throughout the store you can ask questions.

Amazon’s first Fresh store is a 35,000 square foot traditional supermarket, opening in a strip mall in Woodland Hills, California, next to a See’s Candy. The address: 6245 Topanga Canyon Blvd.

Woodland Hills is a Los Angeles suburb in the heart of the San Fernando Valley.

Customers can enter the store the traditional way, but if they want to use the cart, they need to open up their Amazon app and swipe it.

Jeff Helbling, Amazon’s vice-president of the Fresh Stores, says the shopping cart uses “a combination of computer vision algorithms and sensor fusion,” within the cart to identify and tally up the items. 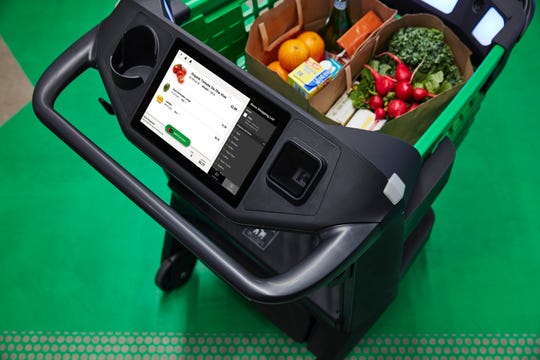 Amazon says the cart will make “a quick grocery trip even quicker by allowing you to skip the checkout line.”

Customers who use the Dash Cart will be expected to bag their own groceries, and should expect to have a shop that won’t need more than two bags, says Helbling.  Shoppers with more than that should use the traditional checkout methods, he adds.

Amazon entered the food business in a big way in 2017 by buying Whole Foods, and expanded with the online Fresh store – which offers foods deliveries – and the Go stores – which offers cashierless shopping in a store that monitors purchases with overhead cameras.

Amazon opened an expanded Go Grocery store in Seattle in February, which also has meats and produce, and is targeted towards locals who can walk in and out. There are 26 Go stores between New York, San Francisco, Chicago and Seattle.

Similar to when Amazon launches a new product, it wants to test market first. So, not everyone can walk in the Amazon Fresh store Thursday. It’s “invite only,” for locals for a “number of weeks,” says Helbling, who wouldn’t offer specifics on when the general public would be allowed entrance. However, it will be this year, Amazon says.

The Fresh store will also double as an Amazon return and pickup facility.

Customers can bring in their returns, even without boxes or labels, to send them back, and purchase assorted Amazon-branded items in the store. Additionally, for owners of Amazon’s popular Echo connected speakers, there will be Alexa tie-ins in the store.

Folks who use Alexa to make shopping lists at home can see their lists visually come to life in the Dash Cart, after they’ve swiped their app to the cart.

Fresh is differentiated from Whole Foods, says Helbling, in that organics are featured at Whole Foods, and Fresh has a wider variety of foods. “It serves a different consumer need,” he adds.

The Fresh stores have been operating as facilities for Amazon to base its local deliveries. Additional Fresh stores will open to the public in the future, in the Los Angeles area and Chicago.