Facebook is enabling users to discover Black-owned businesses through a new feature on the platform.

The social networking giant is rolling out a self-designation tool for Pages that lets entrepreneurs and admins identify businesses as Black-owned. The companies will then appear under a “Black-Owned Businesses” header on the website’s Nearby Businesses front.

The idea is to drive more eyes and foot traffic to Black and minority-owned firms in the wake of civil unrest across the country, according to Maxine Williams, Facebook’s global chief diversity officer.

“The visualization of what Black people have been going through forever has caused more people to become aware and interested in doing something,” Williams said. “You have people saying ‘I want to help, but I don’t know how to help.'”

Page admins will receive a notification to find out more about the feature, which is launching along with a new Black-owned business grant program.

The Mark Zuckerberg-led app is far from the first platform to enhance discovery offerings for Black-owned stores and restaurants following the death of George Floyd.

Yelp and Uber Eats launched Black-owned tools in June that let people find Black-owned firms to support as race-related protests gripped the nation. Both companies reported a sharp rise in searches for those types of businesses.

“Bringing visibility to the great work Black businesses are doing is a huge step in the right direction,” said Perteet Spenser, cofounder of Ayo Foods, a line of West African-inspired cuisine that launched at Whole Foods in July. “Social media has already proven to be a huge accelerator for us.” 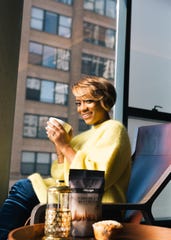 “I think this is great because people have had issues discovering Black businesses locally and nationally,” Christian said. “It’s a great opportunity for people who may not be doing the digging to see those businesses on a platform they already use.”

While increasing awareness is welcome, some Black business owners say they are more reluctant to opt-in.

“Generating exposure is good, so I welcome that part,” said Angel Jackson, founder of Replenish Kombucha dispensary in Bartlett, Tennessee. “The only reluctance I have is, I founded my business on merit. I want people to use our products because they’re the best, not just because the business is Black-owned.”

The Facebook announcement arrives along with news on its Black-owned business grant program. The social networking site is opening applications for the program, which it has committed $40 million.

Only businesses with 50 employees or less qualify. Companies also have to be negatively impacted by COVID-19, Facebook said. The company previously announced a $75 million commitment to support Black-owned small businesses and nonprofits supporting the Black community.