Police in Bellmawr, N.J. were met with applause and “USA” chants after allowing a gym to defy lockdown orders and reopen.

CAMDEN, New Jersey – A top elected county official criticized the unauthorized opening of a local gym, as well as a crowd that gathered in support of the business.

Meanwhile, police stepped up enforcement of an executive order that barred the gym from operating as a non-essential business during a COVID-19 state of emergency.

Officers on Tuesday issued summons violations for a second day for the operation of The Atilis Gym in Bellmawr, N.J., while several patrons also faced charges, according to Bellmawr police.

“In short, there is a right way and wrong way to do things and the actions that have transpired at (The Atilis Gym) are clearly the wrong way,” Louis Cappelli Jr., director of the Camden County (N.J.) Freeholder Board, asserted in a statement.

The gym opened Monday in defiance of an executive order by Gov. Phil Murphy that has idled “non-essential businesses” since March 21. 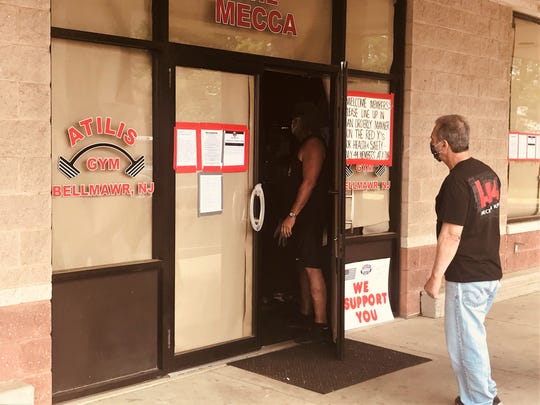 The gym’s co-owners, Ian Smith and Frank Trumbetti, contend the shutdown order violates their constitutional rights. They were cheered by dozens of flag-waving demonstrators outside the Browning Road business.

Cappelli asserted Monday’s “capricious actions” threatened the fight against the coronavirus, which has infected more than 5,800 Camden County residents and killed at least 280.

“Having rallies with congregations of people close together without masks is putting people at risk to spread the virus,” said Cappelli, who added “arbitrarily opening a nonessential business is breaking the law.”

Bellmawr police on Tuesday issued summons violations for a second day to Smith and Trumbetti.

A lawyer for Smith and Trumbetti has vowed to challenge the executive order in court.

Attorney James Mermigis of New York has described Murphy’s mandate as “draconian” and “a gross abuse of power.”

A GoFundMe campaign, organized to help pay the gym’s legal fees, had raised more than $31,000 by Tuesday afternoon.

“There is no question this has been tough on all of us,” said Cappelli, noting people have lost jobs and are experiencing food insecurity.

But he contended “strong, painful measures” are needed “because the alternative of increased hospitalizations, ICU bed usage, ventilators and death is not acceptable.”

At a press conference Tuesday, Murphy said, “We are not there yet (for gyms to reopen).”

Among other concerns, he cited the risk of contagion for people exercising together in an enclosed space.

Murphy has eased restrictions on some outdoor activities, with tennis clubs, batting cages and community gardens to open at 6 a.m. Friday.