A dog was adopted from a shelter in Eatontown, New Jersey after losing her original owner to coronavirus.

Nicole Victoria was sitting on her porch in Cream Ridge, New Jersey when a retired biochemist who lives across the way ambled over, clutching a dozen daffodils from his garden and asked if he could trade the bright bouquet for a can of cold Pepsi.

A week or so later, a teacher offered her son’s old bike to Victoria’s foster son so Victoria baked a couple dozen cookies to thank her. Neighbors, whose children were grown, then offered an old swing set frame and they, too, will get baked goods.

For Victoria, a 43-year-old school administrator, these are the kinds of connections that a fistful of Benjamins can’t buy.

“I guess before it was just so easy to go to the store or click a button and have an item you needed delivered within a day. Now that stores are closed or crowded and deliveries are backed up, we learn to be resourceful,” Victoria says.

Welcome to the real sharing economy. Social networks are brimming with feel-good tales of bartering (trading household items and other hot commodities), gifting (filling someone’s needs and getting something you need in return sometime down the road) and paying it forward (sharing your time or your bounty to help others).

Social media has become the pandemic’s equivalent of knocking on a neighbor’s door to borrow a cup of sugar or milk, or an egg or two. Hand sanitizer, disinfectant wipes, yeast, even fruits and vegetables, books and beer, are being swapped at a safe social distance in friendly transactions between pals and neighbors.

Looking for Lysol spray, Clorox wipes? COVID-19 wiped out disinfectants, but here’s when you can buy again

Baking bread and all out of yeast? Here’s when it will return to store shelves

On Facebook people are turning to local “Buy Nothing” groups and the Community Help for COVID-19 hub.

Naomi Gleit, vice president of product for Facebook, says Facebook users are searching for baby essentials, hand sanitizer, toilet paper and cleaning supplies and volunteers are responding by running errands and shopping for groceries, donating homemade face masks and diapers and sharing food. Nextdoor says it has seen acts of kindness, offers of help and trading of scarce goods in neighborhoods around the globe, throwing a lifeline to those most at risk of contracting the coronavirus.

Going cashless out of necessity

These informal, cashless transactions are being fueled by supply shortages during shelter-in-place orders, Crone estimates that person-to-person bartering of packaged goods, which usually hovers around $4.2 million in the U.S., will grow by 50% this year.

That does not surprise Billy Lee, a 30-year-old restaurant manager from Jackson, New Jersey. He says he and a neighbor recently settled on the value of a few rolls of toilet paper: a plate of chicken marsala.

Lee was whipping up golden pan-fried chicken cutlets and mushrooms in a rich wine sauce one evening while texting with his neighbor about running low on toilet paper. His neighbor joked they should trade a 12-pack of toilet paper for dinner. So Lee wrapped a plate in tin foil and used a mechanical grabber to lower it over the fence to his neighbor.

“It’s not the dollar that’s a commodity anymore. It’s the chicken marsala.” 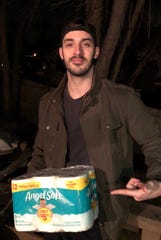 Billy Lee, a 30-year-old restaurant manager from Jackson, New Jersey, says he and a neighbor recently settled on the value of a few rolls of toilet paper: a plate of chicken marsala. (Photo: Billy Lee)

“It’s funny because bartering had never really crossed my mind until that night. Living in the USA 2020, you never really consider that the Earth will hit the pause button on you, and then you start depending on each other in the strangest ways,” Lee says. “It also made me realize for a moment how obsolete the dollar can be if a scenario like this were to be played out over years. It’s not the dollar that’s a commodity anymore. It’s the chicken marsala.”

For Scott Huffard, a 34-year-old history professor living in Beech Mountain, North Carolina, a remote mountain town in the Blue Ridge Mountains that is a 25-minute drive from the nearest grocery store, toilet paper became the perfect bartering chip when he ran out of dishwasher soap. He swapped six rolls for five packets. 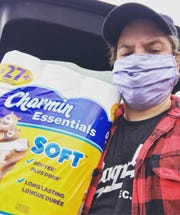 Scott Huffard, a 34-year-old history professor living in Beech Mountain, North Carolina, scored a 12-pack of toilet paper at the grocery store so he traded six of the rolls for dishwasher soap. (Photo: Scott Huffard)

Huffard, who teaches a course on the history of capitalism that examines other forms of exchange such as bartering, says Americans have been fortunate to live in an era of abundance since World War II.

“Bartering goods like toilet paper is a new experience for most of us now,” he says. “We’re just so used to fixed monetary values on everything we purchase, but if you look at the broad sweep of human history, this is a relatively new phenomenon.”

Scarcity was the mother of invention for Emma Zielinski, 31, a wholesale fulfillment manager for a New York City jewelry company who’s been stuck in her Lawrenceville, New Jersey, home for nearly two months.

Craving bread, she traded a growler of home-brewed mosaic pale ale for a crusty loaf of sourdough with a friend who lives a couple of blocks away. She and her husband are now tapping the four kegs he brewed for his birthday party canceled by the lockdown to barter for more bread.

“We are keeping our carbs-for-carbs trading going,” Emma Zielinski said. “The economy itself is bartering anyway. You exchange money for goods. This is just taking the money out of it.”

Looking for Pampers and Huggies?: Diapers and wipes return to store shelves as COVID-19 shortages ease

A way to save when money is tight

These goods-for-goods swaps are helping Americans who’ve had to cinch their belts as the pandemic pushes the country into recession and millions out of work.

At the end of March, Los Angeles entertainment attorney Michelle Seañez offered free lemons from her brother’s tree to neighbors on Nextdoor. A neighbor responded, but wanted to give Seañez a tomato plant in exchange. So Seañez walked over with an armful of lemons to collect the tomato plant from her neighbor’s porch only to find a couple of loofah plants had been left for her, too. 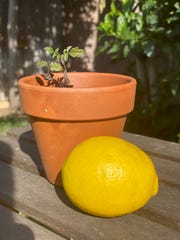 “Now he’s got a solid agreement and I have some great home workouts and meal plans,” Seañez says. “I think it’s a great way to exchange goods or services. Especially now that we all need to stay physically distant from each other, this way it’s a friendly exchange and it helps those of us who have had to re-budget due to the decrease in income.”

A sense of connection despite isolation

Sometimes it’s not just about the goods you get. At a time of extreme isolation, bartering is making people feel they are a part of a community that looks out for one another.

Marissa Eckrote, a 25-year-old doctoral candidate in economics at Michigan State University, says bartering used to be something that she read about in introductory economics textbooks. As the COVID-19 pandemic hit East Lansing, it became a very real part of her everyday life as neighbors banded together to take turns picking up supplies on grocery store runs.

Laura Hankin, an author in Washington, D.C., exchanged a glass of wine for a jar of jam.
“It’s happened one or two other times since then, and we’ve started jokingly calling it our barter system,” Hankin says. (Photo: Laura Hankin)

“When cases were still spiking in Michigan, we did this so each of our three households only had to do a grocery run about once every three weeks,” Eckrote says. “Usually when we did our grocery run, we would stock up on everything we thought we needed for about three weeks, but there are certain things you can’t stock up on like milk and bananas. This was the case for the others as well, so all of us refused to accept money from each other and just swapped our services every time we were running to the store.”

When Eckrote had a hankering for fresh bread, she asked a neighbor to pick up yeast and exchanged a loaf of focaccia for the packets.

Marissa Eckrote, a 25-year-old doctoral candidate in economics at Michigan State University, traded a loaf of focaccia bread for the yeast packets she used to bake it. (Photo: Marissa Eckrote)

That feeling of solidarity in the midst of a crisis has brought her neighborhood together, she says. And that, in turn, has gotten her thinking critically about the value of barter systems.

“Yes I could have paid them to go get yeast for me, or could have just relied on the fact that when we ran out to the store, we would grab things for them, but at that time running out to the store felt stressful and I felt like homemade bread was the least I could offer up,” Eckrote says. “I don’t know if I will barter anymore during the pandemic or even after, but this will definitely be an anecdote I use when teaching the concept in introductory economics classes in the future.”

A few weeks ago, Laura Hankin, 31, an author in Washington D.C., says her neighbor texted, asking if she had any extra wine. Her neighbor left a glass on the stoop and, once back inside, Hankin poured wine into the glass. Next to the glass, her neighbor had left a jar of jam.

“It’s happened one or two other times since then, and we’ve started jokingly calling it our barter system,” Hankin says. “I’m currently making my way through a bag of excellent coffee that she left for me. I don’t know if it’s entirely fair to call it full-on bartering though. It’s very casual and sporadic, almost a little joke to feel connected.”

Nicole Victoria exchanged a soda for a bouquet of daffodils from her neighbor’s garden. “The flowers became a symbol of hope to me. A remembrance of times when we weren’t so closed off from our neighbors,” she says. (Photo: Nicole Victoria)

Victoria says she would have gladly given her New Jersey neighbor that can of soda, but she was grateful for the daffodils, which she placed alongside a framed photograph of her sister who died in August.

Shortages, and the pandemic that caused them, may only be temporary, but Victoria says she hopes the spirit of neighbors helping neighbors sticks around.

“The flowers became a symbol of hope to me. A remembrance of times when we weren’t so closed off from our neighbors,” she says. “As a history teacher, now social studies department chair, I have thought back to all the people who predated me in being resourceful when they couldn’t find things like sugar or butter during the Depression or wartime. They bartered. They shared. I am hoping at the end of this, people see this time as a valuable lesson in community and what we really should value in life: People, conversation, a shared sense of working together.”