The world’s best-selling sports car celebrates a birthday April 17. The Mustang’s been an American staple since it debuted in 1964.

Gale Halderman, a man known to classic car historians as the artist who sketched the original Ford Mustang, died Wednesday in the hospital at age 87 after suffering from liver cancer.

“Sad news for Mustang fans everywhere,” said Matt Anderson, curator of transportation at The Henry Ford museum. “Lee Iacocca will always be remembered as the father of the Mustang, but he was merely the driving force behind a team of talented designers, engineers, and marketers — with Mr. Halderman prominent among them.”

Halderman is credited with proposing the long scoop on the Mustang’s side, Anderson said. “Some 55 years later, that scoop is still a defining feature on the car. I’m glad to know that Mr. Halderman’s contributions were recognized and celebrated by Mustang fans over the years. He knew how much the car meant to owners and enthusiasts.”

The “iconic Mustang design sold more than 8 million units, inspired six model generations of design and has been continuously built for more than 50 years,” wrote Tom Stahler for journal.classiccars.com.

“Most people consider the late Lee Iacocca as ‘The Father of the Mustang.’ However, Iacocca wasn’t the man who put the pencil to the paper. Gale Halderman, however, remained in the background,” Stahler wrote.

Ford designer Gale L. Halderman, inducted into the Mustang Hall of Fame, died April 29, 2020 at age 87. He is mourned by classic car aficionados worldwide. This photo is circa 1970. (Photo: Ford Motor Co.)

Jimmy Dinsmore, author of “Mustang by Design: Gale Halderman and the Creation of Ford’s Iconic Pony Car,” and spokesman for the Halderman family, described to the Dayton Daily News a humble man who “touched the heart of every Mustang enthusiast out there.”

“As great of a designer as he was, he was an even better human being,” Dinsmore told the Dayton Daily News.

“The most striking thing about the 40-year Ford employee was Halderman’s humility. For many years, Halderman did not receive much attention for being the Mustang’s original designer, preferring to let others take the credit,” according to the Dayton Daily News.

Halderman was a Tipp City, Ohio, native who died at Upper Valley Medical Center near Dayton.

“As we mourn the loss of our dear friend Gale, we remember his amazing contribution to the introduction of our Pony car. While there were countless accomplishments in Gale Halderman’s 40-year career at Ford Design, certainly none was more impactful than his work penning the shape of one of the world’s most iconic cars, the Mustang,” said Ford spokesman Berj Alexanian. 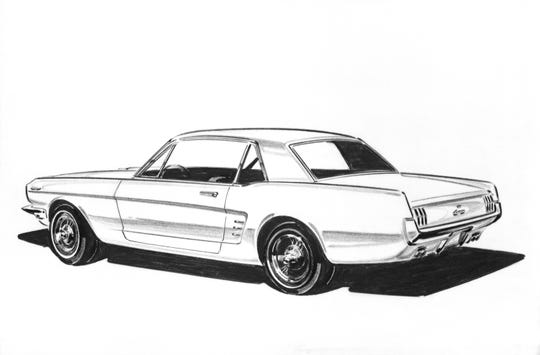 With no one entirely satisfied with the proposals that had emerged so far, a new design competition was held in September 1962. Each of the Ford, Lincoln and Mercury studios put together sketches and clay models for the final evaluation. Gale Halderman in Joe Oros’ Ford studio did several sketches in this period from which Oros and his executive designer selected this one. (Photo: Ford Motor Co.)

The official Ford biography for Halderman reflects years of hard work at Ford that led to his induction into the Mustang Hall of Fame.

Auto historians and designers savor the little-known detail of a man who left a profound legacy. The following career snapshot for Halderman was provided upon request to the Free Press on Thursday by Ford. This is how an iconic vehicle is born: 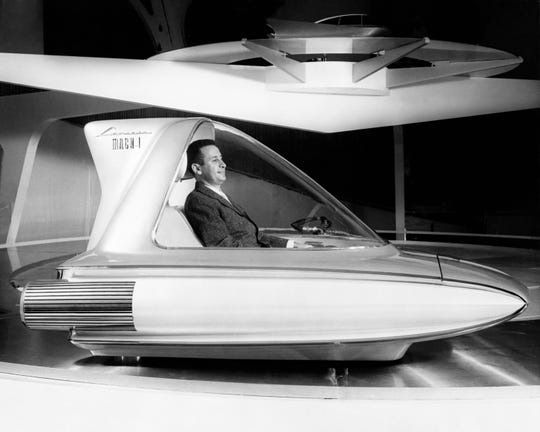 In retirement, the designer established a venue for old car meets at his family’s farm in Tipp City, Ohio, which included the “Halderman Barn,” which includes drawings and memorabilia and his extensive Mustang car collection, according to Ford.

“The barn is decorated with automobile artwork contributed by many of the designers he worked with at Ford,” the company said.

The museum, which is run by family, will be kept open by appointment.

“Gale’s Museum is a destination for all Mustang enthusiasts,” Dinsmore told the Free Press. “It’s not a car museum but a museum to the legacy of America’s pony car from the design perspective.”

The Dayton Daily News reported that Halderman is survived by three daughters: Karen Koenig, Kim Learning and Carol Marchelletta; nine grandchildren, and eight great-grandchildren. He was preceded in death in 2013 by his wife of 60 years, Barbara Senter Halderman; an infant son and a daughter. A celebration of life is being planned.

His death is being mourned on social media.

What an inspiring legacy to leave behind. To have given shape to a brand that has transcended space & time to stand tall as a symbol of freedom & passion for millions of car lovers for more than half a century. Respect. R.I.P #GaleHalderman#Mustangpic.twitter.com/aoj2bADoc8

This is how I will always remember my friend Gale Halderman. That smile when talking to Mustang enthusiasts. #RIPGalehttps://t.co/OC3MmHPVaTpic.twitter.com/Q3T0DAybNS

Today is a sad day for automotive enthusiasts.https://t.co/LvP0dZx9qU#ford#mustang#GaleHalderman

It was one of the most enjoyable and rewarding experiences I have had meeting Gale Halderman. Truly a giant in his industry and an example of gentlemanly behavior and dignity.

Thanks #GaleHalderman and rest in peace sir.