President Donald Trump has declared that meatpacking plants are “critical infrastructure” in order to keep them open during coronavirus.

American slaughterhouses processed nearly a million fewer cattle, hogs, and sheep in the past week than they did during the same time a year ago, marking a new low that experts say will likely increase “spot” shortages of meat at some grocery stores.

“I wouldn’t say the food system is breaking, but at least the meat sector is in real serious, critical condition at the moment,” said Jayson Lusk, head of the Department of Agricultural Economics at Purdue University. “The chances of there being limited availability have risen, and it’s going to depend a lot on where you live.”

Meanwhile, legal experts said President Donald Trump’s executive order Tuesday declaring meat packing plants are “critical” to keep open will do little on its own to stop the slide in meat production brought on by the spread of the coronavirus among meatpackers.

“It doesn’t compel meat or poultry producers to remain in production,” said Deborah Pearlstein, a law professor at Yeshiva University, and it doesn’t give employers immunity from lawsuits.

Outbreaks of the novel coronavirus have shuttered an alarming number of America’s meat packing facilities in recent weeks, with at least 4,400 workers falling ill across 80 plants, causing 28 to close for at least one day, according to data compiled by USA TODAY and the Midwest Center for Investigative Reporting.

A decrease in the number of hogs being slaughtered is driving the drop. That number fell to 283,000 Wednesday, down from more than 500,000 as recently as mid-March.

Even so, Lusk and others say, most Americans will still be able to buy meat. Steve Meyer, an economist for Kerns & Associates in Iowa, said panic buying will only exacerbate shortages.

“We’re not going to run out of meat,” Meyer said. “Buy what you need, and leave some for somebody else, and I think we’ll all get through this OK.”

Supply will depend on existing contracts between individual grocers and their suppliers. If one store has a relationship with a supplier whose plant is down, meat may go out-of-stock there. But a different grocer down the road could contract with a supplier facing no shutdowns.

“It’s kind of luck of the draw of which one you might be shopping at,” Meyer said. He recommends that customers ask their grocer when another shipment is expected or try another store.

Data show poultry availability holding steady. Retailers were 13.5% out of stock of poultry as of Monday, better than 14.4% a week earlier and a high of 25.4% on March 19 during the peak of America’s panic buying, according to Euromonitor International.

Industry leaders are sending mixed messages about what to expect next. 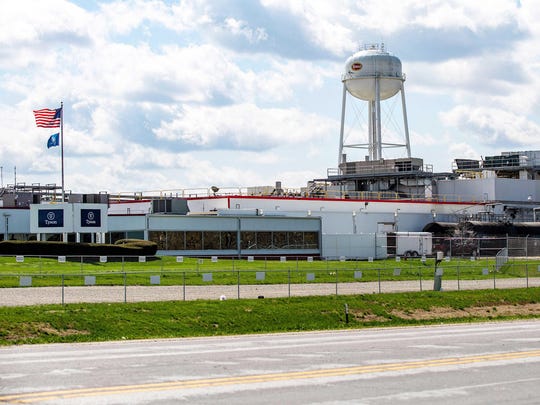 The Columbus Junction Tyson Foods plant in Iowa has closed after 186 tested positive for the new coronavirus. The facility is one of the nation’s major pork processing plants. (Photo: Joseph Cress/Iowa City Press-Citizen)

But Cargill CEO Dave MacLennan said Tuesday on Bloomberg TV’s “Leadership Live With David Rubenstein” that “the ability of us to produce food is still there” despite challenges for the supply chain.

Mike Duffy, CEO of C&S Wholesale Grocers, one of the nation’s largest distributors of food to retailers, said the supply of meat, especially pork and beef, “is very challenged right now.”

Shoppers will find more retail shelves out of stock “until processing capacity is brought back online,” Duffy told USA TODAY in emailed remarks.

For farmers, the out-of-whack supply chain is turning into a disaster. They are forced to consider euthanizing animals, including hogs and chickens, that they can’t sell to processors.

In the past week alone, USDA figures show 935,000 fewer cattle, hogs, and sheep were sent to meat processing plants than over the same time period a year ago.

As a result, farmers are reportedly “attempting to slow the growth of hogs and cattle by removing certain ingredients in the feed,” Arun Sundaram, a meat industry analyst with CFRA Research, wrote.

Most chickens only live for 38 to 42 days, said Matt Wadiak, a founder of Blue Apron and CEO of pasture-raised chicken company Cooks Venture. If those chickens have nowhere to go, they will be euthanized.

“The problem is we don’t have a diverse and resilient food system,” Wadiak said. “We have a food system that is inherently flawed, filled with cracks, extremely fragile and overly consolidated.”

Is Trump’s order a savior, or paper tiger?

However, legal experts say it’s unclear exactly how the order will prop up the meat packing industry.

The executive order gives the USDA under Agriculture Secretary Sonny Perdue authority under the Defense Production Act, Pearlstein, at Yeshiva University’s Cardozo Law School, said. But that authority is mostly limited to allowing the government to prioritize contracts, she said, not demanding new ones or forcing factories to remain open.

All eyes will be on what Perdue does next, Pearlstein said.

In a statement Tuesday, a USDA spokesman did not detail how the order will be used to keep plants open, but said the agency will require that meat packing companies provide written plans for how they will protect workers from COVID-19 infections.

Smithfield, one of the largest meat processing companies in the United States, issued a statement that said it believed the executive order would help it secure personal protective equipment for workers.

“Importantly, the company believes that the executive order will provide priority assistance in securing an ongoing supply of critical PPE, as well as aid the company in securing broader COVID-19 testing for its employees,” the statement read.

“The key question now is how the secretary plans to use this power,” Pearlstein said. “Would he really prioritize getting PPE to meat packers over, say, health care workers?”

At least one plant that had been expected to close this week is now remaining open.

On Monday, local health officials and workers told the Lincoln Journal Star that the Smithfield plant in Crete, Nebraska, would shut down, possibly as early as Wednesday. But on Tuesday, the day Trump signed his executive order, workers received an email saying it would remain open, leading about 50 workers to walk off the job, according to the Journal Star.

Asked about the situation in Nebraska, Smithfield pointed to a statement it released on its website. The statement says Trump’s order “helps ensure the American people will not experience protein shortages.”

Another major company, Tyson Foods, released a statement saying it has already taken steps such as adding workstation dividers and screening worker temperatures and that “the safety of our team members will remain our top priority as we work with the USDA on next steps.”

The statement did not address whether Tyson would open closed plants. 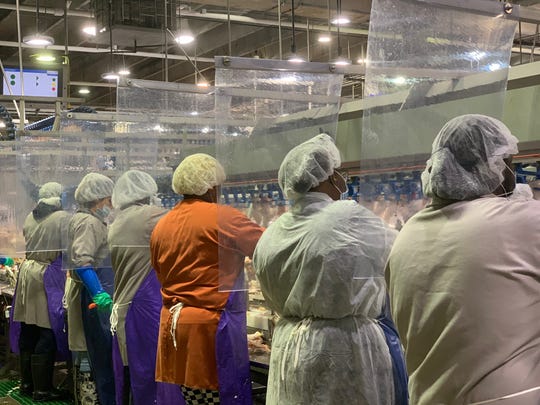 Tyson Foods installed plastic barriers between worker stations at its meat and poultry plants to protect against transmission of the coronavirus. (Photo: Tyson Foods)

In recent weeks, a growing number of laborers in the meatpacking industry have raised alarms about conditions inside plants. A USA TODAY investigation found that while some companies have taken measures such as installing plastic barriers and spreading out workers on production lines, many workers still feel unsafe. Meanwhile there’s been little oversight from federal work safety regulators.

“The White House must work to immediately mandate strong, enforceable safety standards in meatpacking plants,” a UFCW spokesperson wrote in an email. “Those standards must include access to daily testing for all workers, personal protective equipment through the national stockpile if necessary, and paid sick leave so no one comes to work sick.”

However, legal experts noted that Trump’s order specifically directs Perdue to act in a way “consistent” with recent safe-workplace guidelines from the U.S. Centers for Disease Control and Prevention and the Occupational Health and Safety Administration.

By following those guidelines, Perdue could head off legal challenges to the order, said Claire Finkelstein, a law professor at the University of Pennsylvania.

Wadiak, the Blue Apron founder and CEO of Cooks Venture, said workers in many meat processing plants endure tough conditions and are underpaid, leading to annual employee turnover of more than 100% in some factories.

He questioned whether meat processors could remain open if nobody shows up.

“How are they going to do that?” he told USA TODAY in an interview. “If the people are sick, they won’t come to work.”