Travel, food and school may change in post-pandemic 2025

Nobody really can say for sure when the COVID-19 pandemic will finally be over. The answer depends on the availability of an effective vaccine and other unpredictable factors, according to scientific experts.

But some parts of our pre-pandemic life aren’t coming back no matter when the crisis clears. Some might take time to return. And some will be forever changed.

To gain better insight into where we’re headed, USA TODAY posed a question to several futurists, whose jobs involve reading trends in various parts of the consumer business world:

What does American life look like in 2025, assuming the coronavirus is safely contained by then?

Scar-tissue economy: Coronavirus pandemic likely to leave a legacy of fear and uncertainty that holds back economy for decades

Is your Bed Bath & Beyond closing: See the full list of the 63 stores slated to close

Air purifiers might become nearly as common as air conditioners.

Sports stadiums also likely will be filled with people again by then, even if it takes another year or two from now to get there.

The difference in 2025 is that “when those people go home (from the stadium), they might be taking a self-driving Uber, and their e-commerce might all be delivered by drones,” said Jason Schenker, founder of Prestige Economics, an economic forecasting firm in Austin, Texas. “The next day, they go to work in their home. That night, they do their master’s degree online from their home. The one thing they’re going to leave the house for is something cool they can post on Instagram and boast about and enjoy in person.” 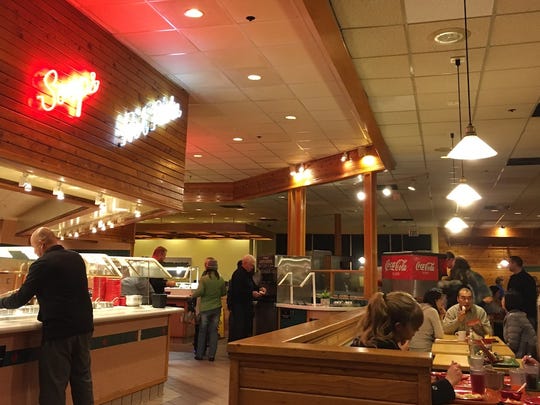 The salad, soup, and bakery buffet chain called Sweet Tomatoes in 15 states and Souplantation in Southern California has called it a day. All 97 locations of the operation, from Oregon to Florida, Nevada to Massachusetts, are permanently shut. (Photo: Courtesy of FASTILY via Wikimedia Commons)

From coast to coast, the pandemic accelerated the demise of buffet-style restaurants and cafeteria chains that weren’t as well suited to outdoor dining or takeout options.

Other independent restaurants had struggled for years with health care, labor and rent expenses before getting punched out by the pandemic. “A lot aren’t coming back,” said Kara Nielsen, director of Food & Drink at WGSN, a trend forecasting company.

Nearly one in six restaurants is either closed permanently or long-term in relation to the pandemic, according to a survey released last week by the National Restaurant Association. That’s nearly 100,000 restaurants, including the 20th Street Cafe in Denver, which opened in 1946.

Nielsen predicts more diners will want plant-based meat alternatives because of concerns about the impact of meat on health, labor and the environment, especially after problems arose at meatpacking plants during the pandemic. She also noted rising awareness about the dark side of global supply chains, such as how trees in the Amazon forest in Brazil have been cleared to plant soy to feed to pigs in China.

“It’s not tenable,” she said. “As we go to rebuilding, I think more and more people are going to be putting investment and energy into rebuilding in a different way.”

That’s why it’s “a good time for innovation” in the restaurant business, said Tim Stock, co-founder at scenarioDNA, a consulting firm that analyzes trends and uses social science to gain insight on the future for clients. “Because of capacity limits, indoor dining will need to be smaller, more intimate experiences and more fluid in their offerings.” 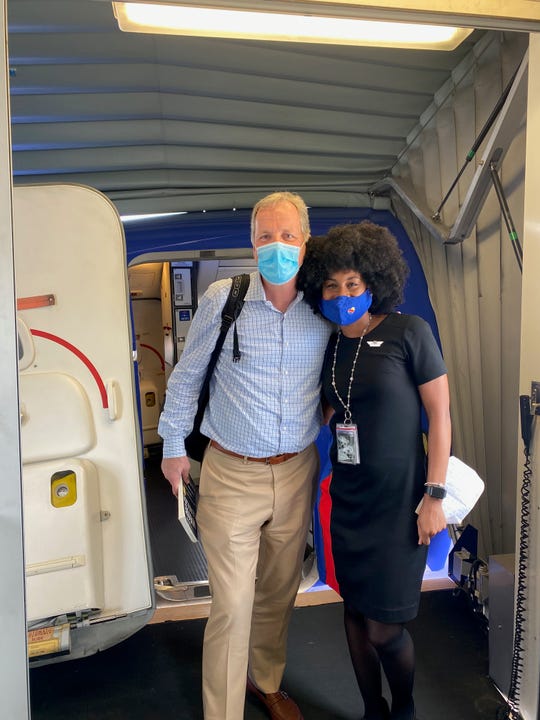 `Frontier Spirit United’ will sort of be a thing

Airline and hotel businesses that have been hit hard by the pandemic might be forced to merge to cut costs and stay viable – a development that seems straight from the script of a futuristic comedy series that debuted in May on Amazon Prime. The show called “Upload” takes place in 2033, when passengers are practically piled onto each other aboard the merged airline “Frontier Spirit United.” 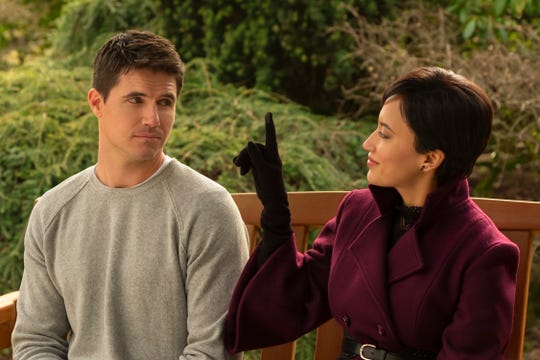 Other merged brands on the show include “Nokia Taco Bell” and “Google Samsung.” This isn’t too far-fetched, said Schenker, who predicts fewer brands in general.

“We probably won’t have this many retail chains five years from now” he added. “We might also begin to see similar things in the academic world in the five- or 10-year window as well.” 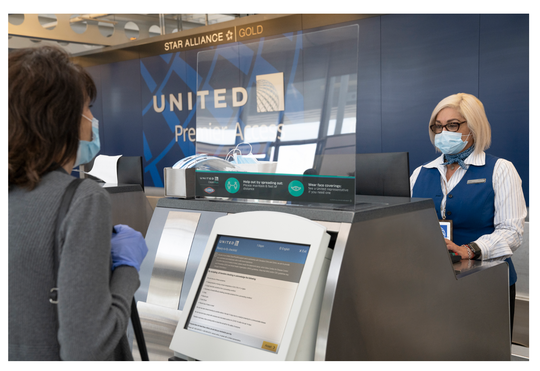 United Airlines passengers flying during the coronavirus pandemic must fill out a health assessment during online check-in, on its mobile app or at the airport. (Photo: United Airlines)

Your reality will come by remote control

More than ever before, the shutdowns forced workers, shoppers and employers to ask serious questions about the need for office space and retail centers:

Why get in your car to commute to work, or shop if you can get your job and shopping done at home with a phone and computer? If you’re a business owner, do you really need to pay rent on all that real estate for employees to come into work every day?

“We might not be able to wind the clock back now that people have realized there’s a significant convenience in lifestyle by working, studying or shopping from home,” Schenker said.

Likewise, colleges might find that they are able to generate revenue with significantly less cost by investing more in online courses and degrees, possibly leading to more choices for students in a higher education market “that’s historically been a guild,” Schenker said. 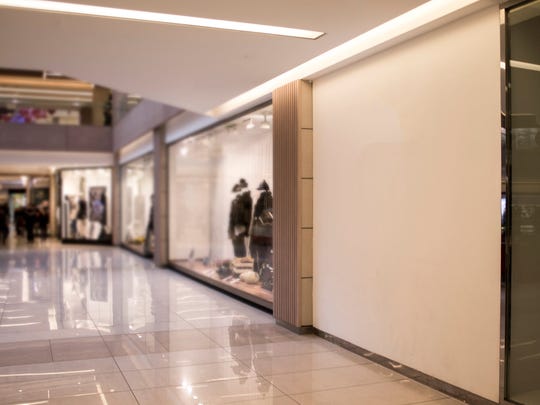 Add more artificial intelligence into the workplace and new questions are bound to arise about the nature of work and education. Manufacturing jobs will continue to be at risk because of increased automation, Stock said. So will delivery driver jobs with the rise of driver-less transportation.

“The list of which jobs will be taken over by AI is growing fast,” Stock said. “The work of the future will be about creativity and analysis, very acute human skills. Which brings us full circle to how do we teach to that? On Zoom?”

Air and gold will be sensible investments

The Spanish flu pandemic of 1918 ushered in more medical research, sanitation habits and even smoking bans in public places that didn’t exist before but remained in place afterward. In this pandemic, air purifiers are in hot demand and soon might be considered essential, too – and not just because of the fear of airborne germs. In recent months, western states have been plagued by poor air quality from wildfires and smog issues exacerbated by global warming. 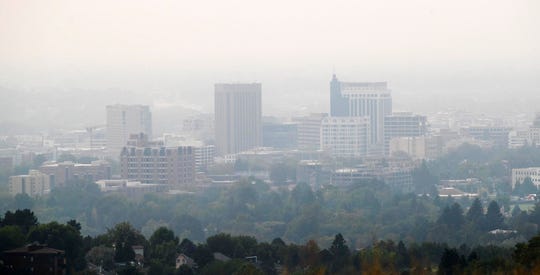 “Eventually, the desire for clean air will migrate to building systems that we take for granted,” Stock said. “It will be expected in schools, homes, stores and workplaces.”

Meanwhile, the national debt is soaring toward $30 trillion with no signs of being reduced, no matter who wins the presidential election in November. This outlook bodes well for those who have invested in gold, betting that the precious metal will be more valuable over time than the American dollar. This year, gold soared to record prices of more than $2,000 per ounce.

“I don’t know if I can make a super bullish case (for gold) when we’ve already seen it rise this much, but it’s very tough to make a bearish case,” Schenker said. 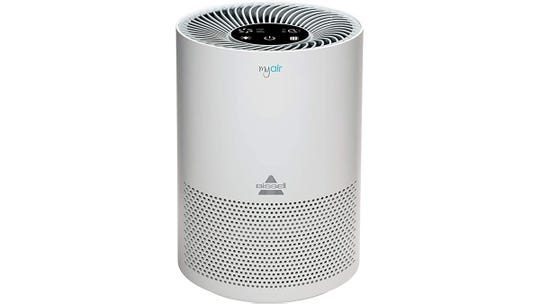 This air purifier may help increase the breathing quality of your home. (Photo: Amazon)

Malls will be for Amazon, golf, pets and kitchens

“By 2025, they are more likely to be diabetes clinics and pet care spaces,” said Antonia Ward, Global Director of Advisory Services at Stylus, a trends intelligence agency.

Some pedestrian-friendly malls still will attract consumers with the right mix of offerings and experiences, including dining. A big reason for that is people will especially crave and value social interaction and public meeting places as they feel more isolated working, shopping and learning at home.

“My guess is it’s going to cost more to go out… but we have this urge to do it,” Nielsen said.  As an example, she said, “look at what’s happening on college campuses,” where it’s been especially difficult to prevent social gatherings.

One potential people magnet is the $5 billion stadium project near the Los Angeles airport, home of the NFL’s Rams and Chargers. That new stadium recently debuted without fans allowed because of the pandemic. It eventually will include retail, office and concert space over about 300 acres – all part of grand plans that had been laid before the spread of the coronavirus.

“The next 12 months are probably going to be kind of dicey, maybe even the next 24 months,” Schenker said of fans being allowed at stadium. “Five years from now, people will be packing that puppy.”