Facebook has your data. Why not China-owned ByteDance’s TikTok?

The Trump administration said Friday that it would bar two popular Chinese-owned mobile apps WeChat and TikTok from U.S. app stores as of midnight Sunday, escalating the U.S. standoff with China.

“Today’s actions prove once again that President Trump will do everything in his power to guarantee our national security and protect Americans from the threats of the Chinese Communist Party,” Commerce Secretary Wilbur Ross said in a statement.

The Trump administration contends the data collected from American users by TikTok and WeChat could be accessed by the Chinese government.

TikTok no more? U.S. banning use of WeChat, downloads of TikTok for national security

“The only difference is the worries around a backdoor to Beijing around user data,” Ives said. “Data issues for Facebook, Google and others are viewed much differently by the Beltway compared to the TikTok situation given the Chinese ownership.”

TikTok says it does not store U.S. user data in China and that it would not hand over that data to the Chinese government.

Tapping the personal information people freely share on social media platforms to target advertising helped turn Facebook’s business into one of the world’s most powerful and lucrative. But this is the first time a Chinese-owned social media company has commanded the attention – and personal information – of so many Americans, raising national security concerns, said Brian Wieser, president of business intelligence for GroupM, the media buying arm of advertising giant WPP Plc. 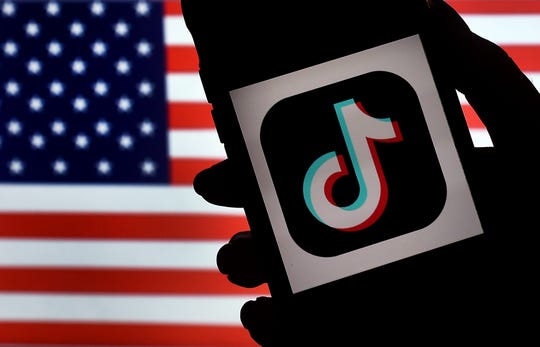 TikTok on the screen of an iPhone with the U.S. flag as background. (Photo: OLIVIER DOULIERY, AFP via Getty Images)

TikTok, which has become a wildly popular platform to share videos in the United States, is estimated to reach about 100 million users here. The Trump administration’s worry: The view into the lives of Americans that all the personal information collected could provide the Chinese Communist Party, Ross told Fox Business news Friday.

“What they collect are data on locality, data on what you’re streaming toward, what your preferences are, what you’re referencing, every bit of behavior that the American side is indulging in becomes available to whoever is watching on the other side,” Ross said. “As you know, China has been taking all kinds of data from all sorts of internet activities and that’s what we’re trying to squelch.”

The TikTok ban is the latest move by the Trump administration to counter Chinese influence in the U.S. The president’s trade war has blocked mergers involving Chinese companies and cracked down on companies like Huawei, which makes phones and other telecommunications equipment. The activities of U.S. tech companies in China are sharply curtailed by Beijing.

“The U.S. has never made very clear exactly what the national security concerns are and the actions directed at China seem as much about trade and competition and tech’s future as national security,” said University of Richmond law professor Carl Tobias.

The vast collection of the personal information of Americans by data brokers and others is a major problem, but not necessarily a national security problem, said Kirsten Martin, University of Notre Dame professor of IT, analytics and operations.

“Beijing could use any social media platform to target Americans or any ad network to target Americans on any site,” Martin said. “Foreign countries push propaganda on U.S. citizens via other platforms that are owned by U.S. counties” such as the Russian interference in elections.