The idea of flying cars is back on the table at General Motors in its pursuit of zero crashes, zero emissions and zero congestion.

The automaker is considering options in the aerial taxi market. Yeah, that’s right, flying cars. Those options could include making the air taxis or partnering with another firm to make them, a spokesman for GM confirmed.

“It’s certainly a space we’re considering,” said Stuart Fowle, GM spokesman. “As Mary Barra said, when we think about Ultium and all of its potential, aerial is an area we’re looking at it.”

It’s not the first time GM has talked about the idea. In 2018, GM’s Mike Abelson, vice president of global strategy, told the audience at the FT Future of the Car Summit USA in Detroit that GM has had conversations with “air taxi” companies about using the carmaker’s autonomous and electric vehicle technology to create flying cars.

But now GM CEO Mary Barra is talking about it and transforming the company.

‘This is going to bankrupt me’: Americans rack up $45B worth of medical debt in collections

Barra mentioned the air taxi idea during her prepared remarks at an RBC Capital Markets virtual conference Monday. It was the first time she’d made such a reference in the context of describing how GM could further capitalize on its development of EVs and its proprietary Ultium advanced electric battery system.

“We believe strongly in our EV future and not just for vehicles, the strength and flexibility of our Ultium battery systems open doors for many use cases, including aerial mobility, which represents a natural next step in a zero emissions vision,” Barra said.

This most recent confirmation that GM is looking at flying cars was first reported by Reuters, which said an announcement by GM about a partnership or work in this space could come as soon as next year.

“We have nothing further to say about timing,” Fowle said. “But it’s an exciting space for us and something we’re looking at. We’re exploring the right way to do it and we’re not shy about taking on partners or doing it ourselves. It’s early in the area of flying cars … we’re always talking to a lot of people.”

The idea has long been out there. Metro Detroit industrial engineer Sanjay Dhall built a prototype of a flying car three years ago. 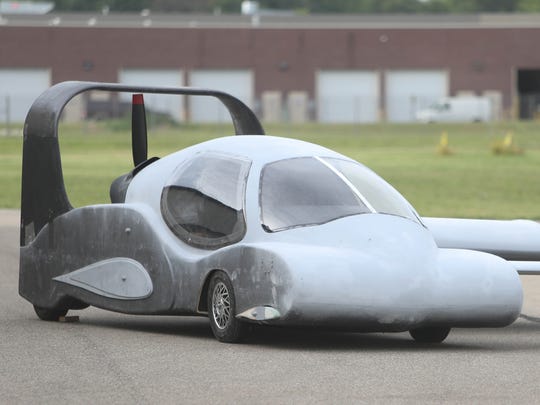 More: Flying Cars? Local engineer aims to get a fanciful idea off the ground

Still, the technology is nowhere near ready to — um — take off.

Reuters cited investor website PitchBook as reporting that corporate and private investors have sunk about $2.3 billion into more than 100 aerial vehicle startups. Those include drones and flying electric taxis. But they’re nowhere close to commercialization or profitability.

He noted in a research note Wednesday that one of the key takeaways from the Consumer Electronics Show in January 2019 was “the momentum of e-VTOL/flying cars which appeared to steal the thunder from autonomous terrestrial transport. We believe advancements in state of the art of autonomous flying cars may, in fact, accelerate advancements in L5 autonomous cars (and vice-versa).”

If GM does pursue the flying cars, it would join other automakers who are exploring the idea. In January, Hyundai Motor Co. said it had partnered with ride-sharing company Uber to develop electric taxes. Also in January, Toyota Motor Corp. invested $394 million in startup Joby Aviation. Similarly, Daimler AG and Geely Automobile have been invested in Volocopter since late 2019, to name a few.

GM has said it will achieve zero crashes and zero congestion with self-driving cars from its Cruise division in San Francisco. GM will achieve zero emissions with an all-electric future. GM has promised to bring at least 20 new electric vehicles to market by 2023.

“We are continuing our transformational way of thinking and operating with a new senior vice president of Innovation and Growth, Alan Wexler, who joined us just a month ago,” Barra said on Monday. “He will focus on identifying future growth opportunities and driving innovation throughout the company. He has a long track record of challenging the status quo to develop new strategies for business growth.”

Wexler and GM’s Vice President of Global Electric Vehicle Programs Pam Fletcher are tasked with exploring electric aerial mobility and “the best opportunities of where we can expand,” Fowle said.

One of the newer ways GM has transformed is by creating its wholly owned subsidiary GM Defense. In June, the U.S. Army awarded GM Defense a $214.3 million contract to provide a mobile troop carrier, called the Infantry Squad Vehicle (ISV). It is based on the 2020 Chevrolet Colorado ZR2 pickup.

The small unit is positioning itself to compete for other contracts that could add billions in revenues to GM’s coffers.

“So short-term and long-term, we’re putting a lot of thought in how we grow our business in new ways,” Fowle said.

More: GM’s future in military vehicles could mean billions in profit for automaker