The Eastman Kodak Company’s large stock options granted to its chief executive officer before the announcement of a $765 million federal loan to the company was a decision made well in advance of serious planning for the loan and did not violate internal policies or insider trading laws, a Kodak-contracted review has determined.

That grant gave rise to questions about whether Chief Executive Officer Jim Continenza was the beneficiary of insider trading knowledge to line his pockets and has temporarily stalled the loan in the midst of public backlash.

But the internal review, while highlighting what it says are weaknesses in the options awarding process, did not find malfeasance with the award to Continenza. 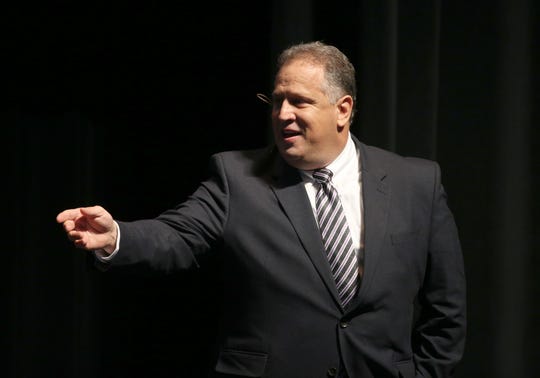 Kodak CEO Jim Continenza during a press conference to announce the company will take part in pharmaceutical manufacturing in response to coronavirus pandemic. (Photo: JAMIE GERMANO/ROCHESTER DEMOCRAT AND CHRONICLE)

‘Vote the a-holes out’: Patagonia’s new tag want to stand up to climate deniers

For the struggling Rochester-based Kodak, once a photographic manufacturing behemoth and now a tiny shell of its former self, the loan stood as an opportunity to regain some footing after decades of layoffs and failures to find a new product that would reverse the company’s fortunes. The loan was to originate from the U.S. International Development Finance Corporation, or DFC, but has since been put on hold.

With the loan, Kodak was chosen to hasten the domestic production of generic drugs, and in turn reduce the country’s reliance on pharmaceuticals from other countries. The July announcement of the loan caused a stratospheric jump in the company’s stock prices — as much as 1000% and a windfall for executives who had exercised options only days before the announcement.

While it was expected that the stock share values would improve, the magnitude of the jump was a surprise, according to the report from Akin Gump Strauss Hauer & Feld, which was contracted by Kodak to conduct the internal review of the circumstances with the options awards.

“… No one anticipated the massive price increase that occurred in the wake of the DFC announcement,” the report states. “Indeed, on its face, the dramatic increase in Kodak’s stock price is startling when one considers that it was based on news that Kodak had signed a non-binding Letter of Interest to apply for a potential loan.”

For its six-week investigation, Akin Gump Strauss Hauer & Feld said that it reviewed documents and over 66,000 electronic communications and conducted 44 interviews of Kodak personnel. The report found that:

• June stock purchases of nearly 50,000 shares by Continenza began while the government loan was in very uncertain stages and followed a traditional path. The same held true for Kodak Director Philippe Katz, who also benefited from the stock surge, the report states. The company’s general counsel pre-cleared the activity.

• Stock options grants in July to Continenza and others were also in line with the company’s traditional operations and had been discussed “well in advance of the start of the DFC loan application process and were awarded for legitimate business purposes unrelated to the DFC announcement.”

• While the awards were not illegitimate, there were shortcomings in the processes and the general counsel should have been more attuned to the possible “optics” problems. The company’s legal department is overburdened and working with outdated policies, the report said.

“Kodak is committed to the highest levels of governance and transparency, and it is clear from the review’s findings that we need to take action to strengthen our practices, policies, and procedures,” Continenza said in a statement. “Expeditiously implementing these recommended measures will be critical as we continue to execute on our long-term strategy and transform our business for the future.”

The internal review may not be the end of the issue for Kodak. There have been Congressional calls for investigations into the trading. Also, The Wall Street Journal has reported that the Securities and Exchange Commission is investigating the stock purchases and awards.