The days of fearing that you might run out of juice when driving an electric car may be coming to an end with the development of the longest-range battery-powered vehicle yet.

Silicon Valley-based Lucid Motors, one of several electric vehicle start-ups hoping to become the next Tesla, revealed an electric car capable of going up to 517 miles on a single charge. That means you could drive from New Orleans to Nashville, from Washington, D.C. to Indianapolis., or from Chicago to Lincoln, Nebraska, without having to charge up.

Lucid Motors on Wednesday debuted the production model of the Lucid Air, a slickly designed mid-size sedan boasting many of the same features as Tesla’s ultra-luxury Model S.

Lucid CEO and Chief Technical Officer Peter Rawlinson, who previously served as chief engineer for the Model S, said the production will begin in early 2021 at the company’s plant in Arizona. Pilot production has already begun, he said.

“What we’ve got is a breakthrough in electric cars,” Rawlinson said. “Lucid is going to change the world.” 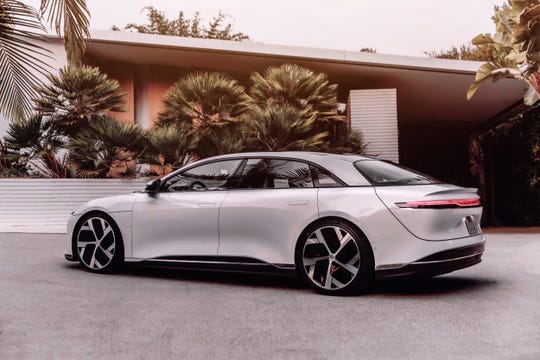 Tesla’s longest-range electric car is the Model S Long Range Plus, which gets 402 miles and starts at $74,990, though it can cost more than $100,000 when options are factored in.

Want to invest in electric vehicles?: Start with their parts

Much like other electric vehicle startups – such as Nikola, Rivian, Bollinger Motors and Lordstown Motors – perhaps the biggest obstacle for Lucid is whether it can manufacture the vehicle efficiently and obtain the financing necessary to survive in the extremely competitive automotive industry.

Financing is taken care of for now. In 2019, Lucid obtained a $1 billion investment from the sovereign wealth fund of Saudi Arabia.

The vehicle is “truly mass-producible,” Rawlinson said. “It’s 100% in-house, and there is nothing else remotely close to this.”

Designers sought to maximize interior space by minimizing components devoted to the drivetrain, and it shows. The vehicle has what Rawlinson called “the largest frunk in the world,” referring to storage space where gas-engine vehicles have a hood for an engine.

While the longest-range model will get 517 miles in federally certified range, Rawlinson said, “I think we can do better than that by the time we get to production.”

Rawlinson said Lucid is also planning to launch an energy storage division, much like Tesla sells batteries for home electricity usage and utilities.

Derek Jenkins, Lucid’s vice president of design, said the Lucid Air’s unique design elements include what he believes is “the largest taillight on any production vehicle,” as well as aerodynamic air shutters on the fascia. The vehicle also boasts a 34-inch curved screen where the instrument panel is typically positioned on conventional cars. It will use facial recognition technology to confirm the identity of the driver.