Boutique gym owners are asking to see scientific evidence for keeping their doors closed amid the coronavirus pandemic. Some owners say they can operate safely indoors with COVID safety protocols, like wearing masks and social distancing. (Aug. 3)

LOS ANGELES – As it became the first state to cross the sad milestone of 700,000 cases of COVID-19, California has embarked on a new tiered plan for reopening businesses that has some crying foul.

Critics say the system doesn’t take into account that some businesses can operate safely even in counties with relatively high numbers of COVID-cases. And it hits some businesses harder than others even when it appears they perform similar services.

“While certain businesses are allowed to open … many others continue to be greatly limited, hampered or even closed,” said San Diego County Supervisor Jim Desmond, who held a news conference on the issue Monday. “The state continues to change the targets and move the goal posts.”

Then there is the issue of manicurists, who still can’t work indoors, while hair salons now can.  “It makes no sense to us,” said Mike Vo, board chairman of the Pro Nails Association, an industry group.

The new guidelines, announced late last week by Gov. Gavin Newsom, creates a four-tier, color-coded system based on the rates of coronavirus cases in each of California’s 58 counties. Counties in most of the state, including metropolitan Los Angeles and part of the San Francisco Bay Area, remain in the most severe category. Counties aren’t allowed to move to a less restrictive tier for 21 days to make sure their COVID-19 case trend isn’t worsening.

California has been hit harder than any other state by the coronavirus when it comes to number of COVID-19 cases. But with its number of new cases on the decline lately, the new plan allows even counties in the most severe category, purple, to reopen shopping malls, barber shops and hair salons with limited capacity.

In Redding in the northern part of the state, one restaurant was able to reopen indoors this week at 50% capacity under the new rules since it is in Shasta County, which falls into the “moderate,” or orange, category.

The patio at C.R. Gibbs American Grille in Redding was full, while diners were also eating inside for the first time in weeks, said Ed Rullman, a managing partner.

Many cities have let restaurants open outdoors, even in creating seat areas in streets, but it hasn’t always worked. Diners in Visalia, for instance, have been deterred by the San Joaquin Valley’s scorching heat and recently, wildfire smoke, so indoor dining is a blessing. 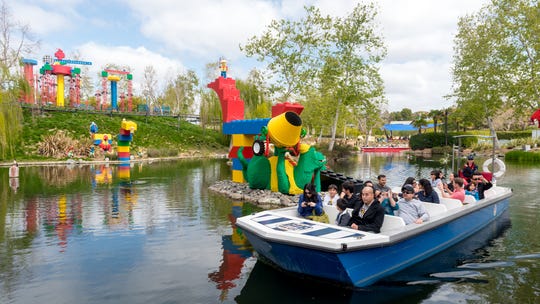 Legoland in Carlsbad, California, has remained closed along with other theme parks in the state. (Photo: Shutterstock.com)

Visalia’s Vice Mayor Steve Nelsen said customers should be able to decide whether there is a hazard of contracting the coronavirus.

“As an individual, I can decide whether I feel safe to enter or not,” he said.

To some, the state’s guidelines look arbitrary, unrelated to the degree of risk. Some casinos on tribal land have reopened with precautions such as mask requirements and plastic partitions while those fully under state or local jurisdiction remain closed.

“I think it’s devastating,” said Kyle Kirkland, president of the California Gaming Association. “The governor’s office looks like they are playing with colors.”

And the latest attempt at reopening plan seems a bit chaotic to some. The state has had four different reopening plans in six months, Jessica Patterson, chairwoman of the California Republican Party, told USA TODAY. “The back-and-forth, it’s driving people insane.”

Besides having to navigate the new state rules, some counties are more restrictive. On Monday, Los Angeles still wasn’t permitting indoor hair cutting even though it was allowed at limited capacity under state rules.

“It’s absolutely horrifying,” said Dani Lyn, owner of Trim a salon in the Studio City section of Los Angeles. “They allow you to open to cut hair but not in L.A. County.”

Her stylists have been working outdoors on a patio where she can’t perform some critical services, such as coloring hair. It’s galling, she said, because she knows her employees can work safely indoors.

Nail salon co-owner Christie Nguyen, co-owner of the Studio 18 Nail Bar in Tustin, south of Los Angeles.  said her manicurists, similarly, would put safety first if her business were allowed to open. They would be separated from customers by a clear plastic shield as they work on their hands and feet, leaving extra space between chairs and wearing masks.

But it’s a race against time. She said the salon is thousands of dollars behind on rent, and with the state’s requirement of 21 days to move to the next category, it’s a matter of trying to hang on.