Samsung’s Galaxy Fold Z 2 is its most expensive ever

Samsung hasn’t given up on its most expensive phone, announcing Tuesday an even steeper price for the sequel to last year’s foldable phone. The new Galaxy Fold Z 2 phone will be priced at a cool $1,999.

That’s $10 more than the already pricey original and it will be available on Sept. 18.

But if you think $2,000 is a high ticket price, it’s a relative bargain compared to the step up, “fashion” model that Samsung would also like to sell you. The Thom Browne fashion edition will cost $3,299.

The Thom Browne model will explore “its shared ethos to provide a deeper level of hardware and software integration. The geometric grey and signature multicolor stripe is complemented by a grosgrain pattern, creating a visual texture of fabric on Galaxy Z Fold 2’s unique design,” Samsung said in a statement.

Forget $1,000 smartphones: Here’s three great ones for under $400 from Apple, Google and Samsung

Consumers will get a new edition of the Samsung Buds and Watch 3 with their Browne purchase, which will be available on September 25.

The Fold Z 2 was originally announced on August 5 as part of Samsung’s “Unpacked” events, but the company withheld pricing. 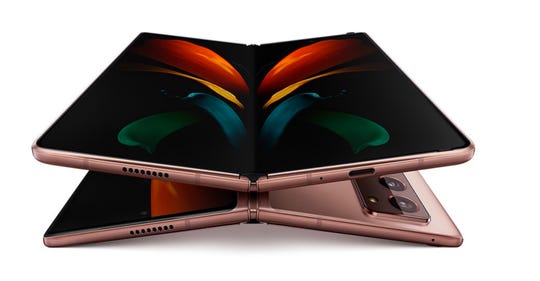 The new phone appears to be a standard 6.2-inch screen premium smartphone, but when unfolded, it grows to 7.6 inches. That’s larger than the previous edition, which grew to 7.3 inches when unfolded

Samsung included some functionality changes, too. In the original Fold, you could have two apps open at the same time, and use them on both sides of the screen. This year, you get three apps open.

The original Fold’s release date got pushed back  after units were sent to the press and discovered to fall apart. Samsung responded by retooling the phone. In a press briefing, Samsung execs said new materials were selected for the latest  editionso that it will be stronger when unfolded.

The phone employs what the company calls “sweeper technology … within the gap between the body and hinge housing to repel dust and dirt particles.”

For folks worried about what to do when the screen breaks, Samsung will offer a “one-time-only” $149 screen replacement service. Samsung says it will offer as much as $800 in trade-in value to owners of the original Fold phone.