As University of Iowa students move into their dorms and prepare for a new school year, many are nervous and fearful that an outbreak might follow.

Tyrel Henry would rather be at home. Instead, the junior at Lewis-Clark State College in Idaho spends his days mostly alone in his room or working out at a local gym.

There isn’t much to do in Lewiston, and he is losing money by being there. If he had stayed home in Kamiah, Idaho, he could be living with his grandmother and saving money.

It wasn’t supposed to be like this. The university had told him his courses would be offered in a “hybrid” format, one where students take both in-person and virtual classes.

Days into his semester, he realized his classes were mostly online. That’s a daunting prospect given how his spring semester of digital learning went.

“I wasn’t prepared and motivated enough to learn online,” Henry said. “I struggled, and I was on edge about coming back to school because I didn’t want to struggle again.”

Henry, like many students in the country, was lured by the prospect of in-person classes to move back to his college town. He only has one class on campus, he says — on Wednesdays. But he is effectively a full-time resident of Lewiston for the semester. For college students like Henry, the coronavirus-era line between “in-person” and “remote” course offerings is increasingly blurry.

I really moved to Lewiston for online classes.. hate to see it.

Across the country, students have crowded into off-campus housing and local apartments — some prepared for a semester in person, others just living with their friends for another semester online. As campuses have started to reverse their plans for reopening, or professors elect to offer individual classes online, the students are still living in town. Many are planning to continue the kinds of social interactions college officials are trying to end by going online.

For some students, the chance of having some in-person classes has been worth the health and financial risks.

But student enthusiasm may dwindle as more universities continue to offer watered-down in-person classes, alter their course offerings at the last minute or see spikes in coronavirus within the community.

‘In-person’ in name only?

Almost all colleges are offering some online instruction even if they’re publicly saying their classes are all in-person, said Katie Felten, of the Davidson College Crisis Initiative, a group tracking colleges’ responses to coronavirus.

The fine print may be buried on colleges’ websites, and some students say they were blindsided with the details after they signed leases or moved in on campus.

Families and students should check the course catalogs, most of which are posted online, to get a better sense of what to expect, Felten said.

But, she said, view that information with some skepticism. Some colleges have quickly pivoted their course offerings, and more will follow. Institutions that thought they could open safely are realizing they lacked the resources they need to effectively control the virus’ spread, she said.

COVID-19 tests on campus: Colleges need testing to stay open, scientists say. Some don’t have much of a plan

Schools like the University of North Carolina at Chapel Hill, Notre Dame, North Carolina State University and others opened for in-person instruction — though even then they had a digital component — only to pivot to mostly online classes as cases surged on campus and in the community. 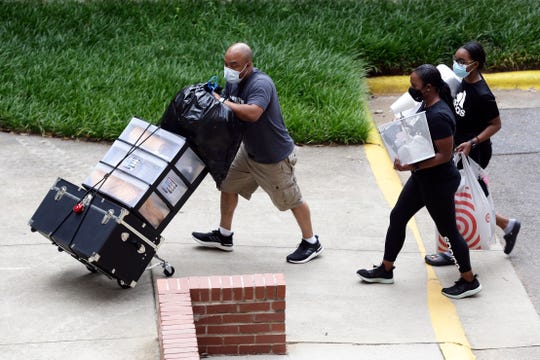 College students move in for the fall semester at North Carolina State University in Raleigh. The school announced it would close residence halls less than a week after moving classes online because of COVID-19. (Photo: Gerry Broome, AP)

Butler University had also planned an in-person semester, but switched to online courses a day before classes started. The university encouraged students to refrain from returning home during the period of remote instruction, saying a “modified ‘shelter-in-place’ ” would contain existing virus cases while preventing further spread.

Meanwhile, the University of Alabama on Friday said it had recorded roughly 1,000 cases since August 19. But Stuart R. Bell, the president of the university, on Monday urged students to follow local health guidelines and didn’t specifically mention the possibility of switching to remote instruction.

“Everyone who truly values the Alabama experience will continue to follow our health and safety protocols, which provide a path to complete the semester together on campus,” Bell’s statement read.

Even universities that offered remote learning for the semester, such as Washington State University, have seen outbreaks in their communities. That institution recently announced it would try to increase testing in the town of Pullman after what local health authorities say are “increasing numbers of COVID-19 cases involving WSU students living in privately owned, off-campus housing.”

Often, the effects of reopening in person linger after a switch to digital. After moving to remote instruction on Aug. 19 and encouraging students to return home, UNC on Monday reported a nearly 30% positive rate in the roughly 900 COVID-19 tests administered from August 24 to 30.

“The rapid spread and increasing rate of positive cases have made our current situation untenable,” he said.

What’s more, many universities, like Clemson or the University of California at Berkeley, have delayed the start of their in-person classes. But it’s unclear if they will actually start face-to-face courses or if they are just saying what students want to hear, Felten said.

“No one knows how to handle this situation,” she said. “Everything is changing every day.”

For some students, the potential for some time away from home is worth the uncertainty. Eighteen-year-old Sadie Varoncq, recently moved into her off-campus apartment in Gainesville to attend the University of Florida, instead of staying with her family in Tampa.

All her courses will be online, but when she signed up, they were all in-person. Regardless, she said, she is just happy to be out of the house. She had lived with her older brother and her parents, and it became chaotic when they all were on Zoom calls at the same time.

Like many students, she said if the classes are all digital, the university ought to offer a discount on tuition. That hasn’t happened at the University of Florida, but a handful of colleges like Johns Hopkins, Georgetown and Princeton are offering some form of tuition discount.

Then there are the campus fees.

Danielle Cosner, studying for a master’s in social work at the University of Iowa, had signed up for in-person courses, but that changed the day she was supposed to start. That’s partially welcome, she said. Cases in Iowa City have been surging, and she doesn’t feel safe studying on campus. 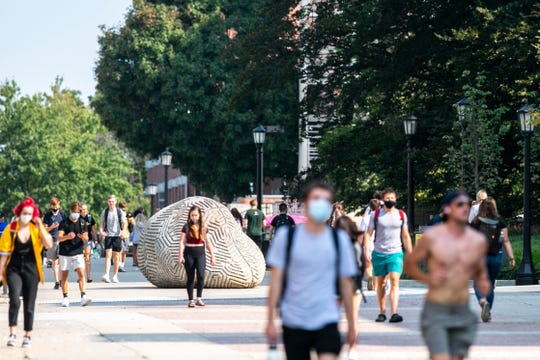 What is unwelcome is the university charging fees — $61.50 for the student union or $150 for the recreation facility — associated with an in-person experience that she doesn’t have full access to.

Cosner said she tried to appeal the fees, since her coursework is now virtual. But the university told her she’s ineligible for a fee waiver because she lives nearby. The university did not respond to USA TODAY’s request for comment.

@uiowa@uiowagpsg@gazettedotcom@presscitizen@LittleVillage@VanessaMiller12 All 6 of my classes were moved online. I am now a distance learning student paying for on campus. UI really won’t refund any fees? What about all the stuff I have to buy to go full time online? pic.twitter.com/NO99lKHipZ

Had she known her classes were going to be online, Cosner said, she would have just applied for the digital program, and saved some money while she was at it.

With the cash she would have saved, she could have paid to upgrade her internet, which she described as spotty, or to buy a computer that doesn’t crash.

“The response from the (university) feels like, ‘Sorry, sucker. You already signed up for on campus,’ ” she said.