Do you want your kids watching more ads from Google?

Google announced a new kids initiative with videos, books and apps on  upcoming Lenovo tablets, but parents beware — the content will be full of ads.

The Google Kids Space, aimed at children  under 9, will have “kid-friendly” apps, videos and books on two new tablets arriving  in September, the search giant revealed on Monday. Yes, there will be ads in the apps, and banner ads as well, but in a briefing, Google declined to state what type of companies will be advertising on the platform or to even cite product categories.

Google describes the Kids Space initiative as a place for parents to manage screen time and have access to “teacher-approved” apps and popular children’s books free of charge, along with curated videos from YouTube Kids, an app for children too young to watch grown-up YouTube.

Google requires a minimum age of 13 to get a Google account and to watch YouTube, where ironically, eight of the top 10 most-watched U.S. channels are aimed at toddlers and tweens, according to TubeFilter.

Forget $1,000 smartphones: Here’s three great ones for under $400 from Apple, Google and Samsung 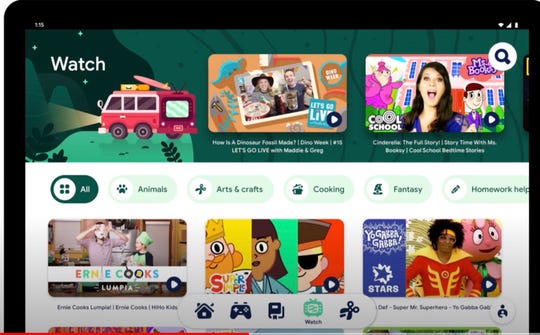 The company has come under fire in the past for how it interacts with children, paying the Federal Trade Commission a $170 million fine for “illegally” collecting personal information from kids.

Back in 2015, a coalition of consumer and child advocacy groups asked the FTC to investigate Google’s YouTube Kids app, calling it deceptive marketing aimed at children under five.

“It’s just one, long, uninterrupted ad,” Jeff Chester of Center for Digital Democracy told USA TODAY at the time. “It turns back the clock 30 years in terms of the role that advertising plays in kids programming.”

In an interview, Google product director Mindy Brooks said unlike traditional Google, which makes its money by serving up personalized ads to users, “There is no interest-based advertising for children” on Kids Space.

Brooks wouldn’t be specific on what type of ads they will see, besides saying “They should all be kid-friendly ads,” that adhere to Google’s guidelines.

Google is offering the ability for parents to opt-out of ads, but they’ll have to work to it by going to the Settings and making the selection.

In a statement, Google said it protects kids’ privacy “by applying data minimization principles throughout the design process and not serving personalized advertising to children using Kids Space and giving parents control. For example, we collect information about a child’s activity in our services to do things like help improve app recommendations.”

The content kids will see on the tablets will be curated, Brooks says, and selected with a team of experts. Examples include videos from PBS Kids, Nickelodeon, Sesame Street and Barbie and educational books and apps.

The two tablets from Lenovo will start at $129 and be available in the coming weeks. Google says it will expand the program to other Android tablet makers as well.