In the most uncertain era of our lives, there are still a few sure things: Death. Taxes. The New York Knicks’ failure to win a championship for yet another season (Sorry, it’s personal). And the dollar’s status as the world’s reserve currency.

Wait: You might want to strike that last one.

The greenback’s prominence in foreign exchange markets is being questioned for the first time in recent memory as the coronavirus pandemic blows up the national debt and the U.S. response to the crisis falls short of actions taken in other countries. Investors, in turn, have been moving money out of dollars and into gold, weakening the U.S. currency.

Although many economists believe the dollar will ultimately hold on to its coveted role on the global financial stage, some experts say there’s at least a chance it won’t.

“Real concerns around the longevity of the U.S. dollar as a reserve currency have started to emerge,” Goldman Sachs wrote in a note to clients late last month.

Since then, Congress has remained deadlocked over another stimulus bill to spur the U.S. economy and the dollar has dipped further against other foreign currencies.

“Certainly, there’s a risk” of the dollar slipping from its perch, says Gregory Daco, chief economist of Oxford Economics. “I don’t necessarily see any positive developments” to bolster the greenback into next year, though he believes it will keep its reserve currency position.

The dollar has fallen 10% against foreign currencies since peaking in mid-March, including a 5% slide since late June, reaching its lowest level since early 2018. Capital Economics, however, notes the greenback is still trading well above its 10-year average.

If the dollar loses its reserve-currency status over the next several years, it likely would push up interest rates for American consumers and businesses, making everything from buying a house to building a factory more expensive. Even if the greenback remains the world’s reserve currency but continues to weaken, purchases of foreign goods would cost Americans more, pushing up inflation. Stockholders, though, likely would benefit.

As a reserve currency, the dollar is held in massive quantities by central banks worldwide and used for international transactions, such as oil purchases. The greenback strengthens when investors and central banks acquire dollars in exchange for other currencies, and when foreign investors buy U.S. assets, such as Treasury bonds and American stocks, forcing them to trade their currencies for dollars. It weakens when a shaky economy prompts investors to flee U.S. investments.

Since the Great Recession of 2007-09, the dollar generally has strengthened because the U.S. economy recovered from that downturn more robustly than the rest of the world. Treasurys, in fact, were viewed as a safe haven, pushing their prices higher and interest rates lower. 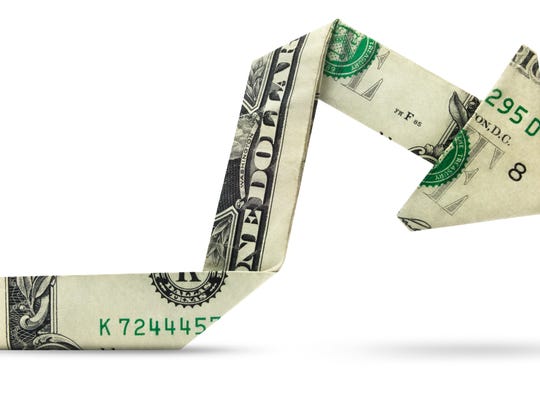 Where home sales are taking off: Looking to buy a home? These are the top 10 hottest US housing markets

The latest on $600 jobless benefit: Is the extra aid in unemployment benefits extended? Your money questions answered

During the early days of the COVID-19 pandemic, amid the prospect of a deep and abrupt global recession, the dollar’s value gained further as the crisis took a bigger toll on Europe and Asia and investors piled into less risky U.S. assets.

In recent months, however, the dollar has taken it on the chin. Here’s why:

While the pandemic has eased in Europe, improving the continent’s prospects for a solid economic recovery, it intensified in the U.S. in late June and July. COVID-19 outbreaks spiked in southern and western states that allowed businesses to reopen early, forcing them to reverse course.

“The (U.S.) virus response is definitely perceived to be inadequate relative to other countries,” says economist Troy Ludtka of research firm Natixis.

Stimulus in Europe, fights in Congress

The European Union recently agreed to a 700 billion euro ($828 billion) economic stimulus package that shares the cost burden among countries. Congress, meanwhile, is locked in a weeks-long stalemate, with the Democratic-majority House passing a $3 trillion measure and the Republican Senate favoring a $1 trillion.

The euro “has benefited from signs that European policymakers are finally getting their act together,” economist Neil Shearing of Capital Economics wrote in a note to clients.

In March, the Federal Reserve sharply cut interest rates to near zero, making U.S. bonds less attractive to investors and narrowing the advantage they held over comparable assets in Europe, where interest rates have been negative, BlackRock Investment Institute says in a research note.

The prospect of higher inflation

Inflation has picked up recently as the U.S. economy has started to rebound from the depths of the crisis but remains historically low. The bigger issue is that Fed officials have signaled they likely will alter their policy to tolerate annual inflation that tops their 2% target for a period of time to achieve 2% price increases over the long term, Shearing notes.

Higher inflation erodes the value of the dollar and further pushes down U.S. interest rates on an inflation-adjusted basis, Ludtka says.

The U.S. response to the pandemic has swelled an already large budget deficit. Congress has approved $2.5 trillion in stimulus measures while taking in less revenue because of the coronavirus-induced recession, widening the budget deficit to $2.8 trillion during the first 10 months of fiscal 2020, compared with $867 billion in the same period a year earlier, according to Pew Research Center.

The national debt – the sum of all annual deficits – is nearing $25 trillion.

The Fed is expected to buy nearly $3 trillion in Treasurys and mortgage-backed securities this year to ensure those markets function smoothly and to hold down long-term interest rates. But to make those purchases, which keep borrowing costs low for the federal government, the Fed effectively prints money. That substantially increases the supply of dollars and lowers their value.

The U.S. already had a big trade deficit, especially with China. During the crisis, exports have fallen more sharply than imports, in part because the U.S. reopened its economy earlier than other countries, leading to a bigger rebound in U.S. purchases of foreign goods. When imports exceed exports, more dollars leave the country and are converted into other currencies.

A persistent weakening of the dollar eventually could lead to the loss of its reserve currency status, but that would take years, Daco says. If it happened, demand for Treasurys would plunge and interest rates would rise, both for the federal government and American consumers and businesses.

Daco says such a scenario is possible but unlikely.

Ludtka is even less concerned. He says there’s no viable replacement for the dollar as the world’s reserve currency. The European Union, he says, faces the possibility of additional defections following Britain’s exit early this year and China is embroiled in potential trade wars with the U.S. and other countries.

“The worries are overblown,” he says.

Still, a further weakening of the dollar would make foreign imports at least somewhat more expensive for American shoppers, nudging inflation higher and possibly hurting consumer spending, Ludtka and Daco say. Consumption makes up about 70% of the economy.

At the same time, a weaker dollar makes U.S. exports cheaper for foreign buyers, aiding American manufacturers. It also boosts the earnings of U.S. multinational companies when they convert their overseas sales from foreign currencies into dollars. That helped American corporations soundly beat dismal earnings forecasts in the second quarter, helping the stock market rally to a new record.

Yet while the vast majority of Americans buy goods from overseas, a Gallup survey shows only about 55% own at least some stocks, directly or through mutual funds or 401(k) plans.