Online learning, single rooms in hotels as dorms and staggered scheduling are just some of the ideas in motion for 2020’s fall semester.

Going to college immediately after high school has been a rite of passage for millions of students. Now, more college-bound students are considering a gap year amid rising coronavirus cases and concerns about the value of college instruction that may be partly or all online.

A new study out this week by SimpsonScarborough finds that 40 percent of incoming freshmen are likely or highly likely to not attend any four-year college this fall. Last week, Harvard reported that more than 20% of its first-year students are deferring enrollment.

But there could be a downside to delaying college by a year: the potential loss of $90,000 in lifetime earnings, according to a recent study from economists at the Federal Reserve Bank of New York. That might seem counter-intuitive, given that the pandemic has pushed the jobless rate higher, prompting questions from families about whether it’s the best time to make a pricey investment in a college degree.

New York Fed economists Jaison R. Abel and Richard Deitz say that’s missing the point. The pandemic has made a college degree more valuable, not less, partly because the prospects for people with only a high school diploma are far weaker in the pandemic than for those with a bachelor’s degree.

“We don’t want to minimize the health considerations — those are very real — but we wanted to put the whole picture out there about the costs of delaying college,” Abel says of their study. 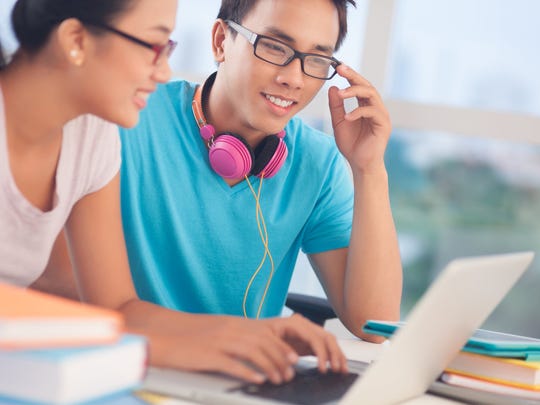 Some would-be college students are considering a gap year, uncertain about the quality of online learning during the pandemic. But some economists say COVID-19 has made a college degree more valuable, not less, partly because the prospects for people with only a high school diploma are far weaker in the pandemic than for those with a bachelor’s degree. (Photo: Getty Images)

The jobless rate for high school grads stood at 12.1% in June, the most recent month for which data is available from the Bureau of Labor Statistics. By comparison, the unemployment rate for college grads was 6.9% the same month. That’s partly because college grads are more likely to hold jobs that can transition to remote work. A year earlier — before the pandemic brought the economy to a standstill — the gap was much narrower, standing at 3.9% for high school grads and 2.1% for college grads.

More: ‘Leaving us behind’: High-risk students ask, why can’t all college courses be offered online?

At the same time, the pandemic has narrowed options for gap-year students, with more hurdles to international travel and fewer internships available. With fewer alternatives to college, students are facing a limited set of choices that may make higher education more attractive, not less. For instance, before the pandemic, an 18-year-old high-school grad might have decided to start her career rather than enrolling in college and forgoing a year (or more) of income. But because of current high unemployment for high-school graduates, that trade-off looks much different — in other words, that teenager might not find a job in today’s rough labor market, which means she would neither be earning income nor be enrolled in college.

The pandemic has changed the equation: “It’s about what are you going to do if you don’t have a college degree,” Deitz notes.

So how does that $90,000 in lost income come about? Mainly by foregoing the first year of income earned by a college degree — about $43,000 on average, the study found. A gap-year graduate would start earning that same income a year later, and never quite catch up. For instance, a 25-year-old gap-year student would earn about $49,000 on average, compared with about $52,000 for a grad who didn’t take a year off. That adds up over a career to $90,000, the study noted.

Of course, families and students are weighing much more than income and unemployment numbers, something that the economists acknowledge. “These are complex decisions and you have to think through them to make the best decision,” Abel says. “In thinking about the economic costs and benefits, it should be part of the set of information that’s considered.”

Families say that they’re weighing much more than economics. Koloud “Kay” Tarapolsi says she’s relieved her 18-year old college-bound daughter recently decided to defer her freshman year until fall 2021. Her daughter was slated to start college this year at the Minneapolis College of Art and Design — halfway across the country from their hometown of Redmond, Washington.

“There were so many factors. Of course, the biggest one, for us, is health,” says Tarapolsi, who is in her early 50s. “We are completely freaked out (that) if something happens to her, or us, we wouldn’t be able to reach each other.”

Tarapolsi notes that she was also concerned about paying for a freshman year that wouldn’t be a typical experience. Even though some classes would have been held in person, others would be online. And students would return home after Thanksgiving break.

“So we are paying for two months, then the rest of the time we’re paying for her dorm room to be storage, and she’s going to come home and do online classes,” Tarapolsi says. The family will spend about $35,000 per year for her daughter’s college, but that payment is also deferred for a year.

Asked about the loss of potential earnings, Tarapolsi says that other issues are more pressing, like health worries and wanting her daughter to have a more typical college experience. “I understand these experts wanting to get life back on track and wanting to get these kids doing something,” she adds. “But she is going to be doing something – she’ll be helping siblings and neighbors with homeschooling.”

About 16% of high school seniors are considering a gap year, up from 3% in a typical year, the education publication Hechinger Report notes. Even though gap year options might not be as numerous as previous year, there are still plenty of choices, says Ethan Knight, executive director of the Gap Year Association.

The key, he says, is to design a gap year that is intentional, educational and purpose-driven — and not to spend the year playing video games.

“The rest of the world is on a gap year right now,” Knight says. “We don’t know what the jobs are on the other side of this thing. Postponing might be one of the smartest things if it can clarify what they want from life.”