The Lyriq’s looks and features could give Tesla a run for the money, but the electric SUV won’t be on sale until late 2022.

The Lyriq is an all-electric two-row SUV that Cadillac first mentioned in January 2019 at the Detroit auto show, flashing an artist rendering of a vague futuristic car on the screen.

On Thursday, GM revealed what the actual vehicle will look like when it goes on sale in the United States in late 2022. It will launch first in China.

Cadillac is not announcing yet which U.S. factory will assemble the Lyriq, but a source familiar with production said it will not be made at Detroit-Hamtramck Assembly, even though that facility is being retooled to build several new all-electric vehicles. The source requested anonymity because of the sensitivity of the information. 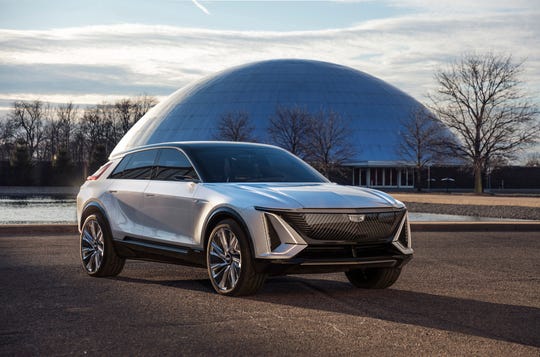 An exterior view of the new Cadillac Lyriq electric SUV. This is an extraordinarily early look at the styling and features of a vehicle that won’t be sold until late 2022. (Photo: General Motors)

Cadillac is also not releasing the Lyriq’s starting price, saying that it will cost, “less than $75,000, but be in the sweet spot for a mid-sized crossover with maybe a slight premium in the early days,” said Steve Carlisle, GM’s president of North America.

What GM will talk about is the importance the Lyriq holds for the luxury brand’s future.

“It offers a pivot point for the brand to gain momentum,” Carlisle told reporters.

Cornerstone for the future

Last year and into early this year, Cadillac was in the midst of a brand rebirth with new SUVs and the CT4 and CT5 sedans coming out. The redesigned 2020 Escalade SUV was on its way to market. The fresh lineup would provide the long-awaited jump start to Cadillac sales.

Then the coronavirus pandemic hit the nation in March.

But the Lyriq is now seen as “a cornerstone in which we will build a future and that future will include additional EVs that we’ll add to the Lyriq in the next few years,” Carlisle told the media. 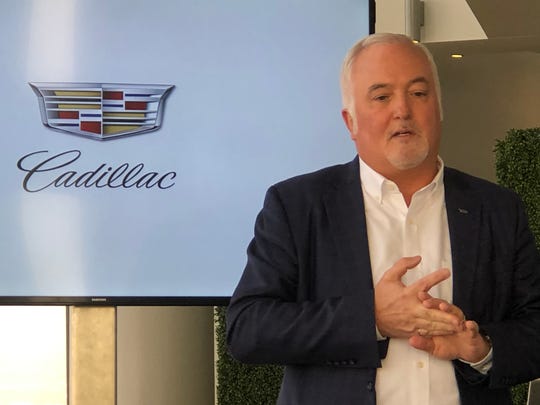 GM has said it envisions an all-electric future as a company. It plans to bring at least 20 new EVs to market by 2023 and it’s tagged Cadillac as the brand to showcase the technology first.

Cadillac’s transformation to an anticipated all-electric lineup by 2030 will be calculated and gradual with the Lyriq taking the lead, Carlisle said.

“We really have to work through what this transformation is going to take across the emerging ecosystem and how we engage a broad range of stakeholders to ensure our mutual success,” Carlisle said. “As demand comes, we anticipate a range of conditions necessary to promote the adoption of EV, including preparing our dealer network, expanding the charging infrastructure and grow customer acceptance. We’re not going for a sugar high.”

It is an ambitious and difficult transition and the Lyriq is a challenging launch for Cadillac, said Jessica Caldwell, Edmunds’ executive director of insights. Caldwell pointed out that while other luxury brands offer electric SUVs, only Tesla has sold large numbers with its Model X, which features distinctive gull-wing rear doors.

But there is more to the Lyriq’s success than sales, Caldwell said. If the technology and the vehicle are well-executed, it may be “a unique opportunity to help Cadillac transform its brand,” she said.

“The company has been trying – and failing – for years to elevate its image,” Caldwell said. “If Cadillac does it right and can get consumers to view the Lyriq as competitive with Tesla and other European luxury brands, this could help give the brand a push in the right direction.” 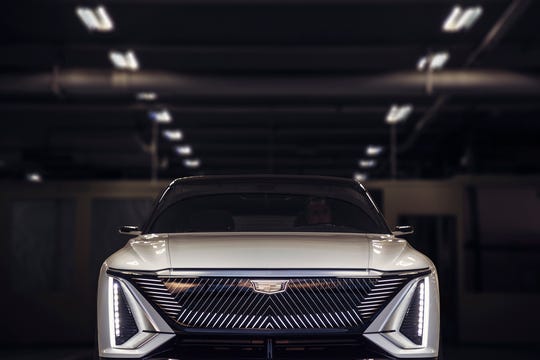 A new aggressive look for the new Cadillac Lyriq electric SUV. This is an extraordinarily early look at the styling and features of a vehicle that won’t be sold until late 2022. (Photo: General Motors)

It is more about branding because at the moment, sales in the luxury electric SUV space are minuscule. The current players – Tesla Model X, Jaguar I-Pace and Audi e-tron – have combined sales of less than 12,000 units in the first half of 2020, Caldwell said. That compares with the same period last year, when COVID did not exist, when the three sold 13,000.

Cadillac plans to top its rivals by offering a better overall package beyond just a good-looking car, Carlisle said. To take on Tesla, he said Cadillac will address customer pain points around EVs such as: battery range, charging time, connectivity and craftsmanship.

The Lyriq is based on GM’s next-generation, modular electric vehicle platform. It will be propelled by GM’s Ultium battery system and get more than 300 miles on a full charge. A customer will be able to charge it from home, a workplace or on the road, GM said. This is an early look at the vehicle’s features given it won’t go on sale for two years.

GM is working to offer the infrastructure to support EVs, Carlisle said, noting GM’s recent partnership with EVgo. The companies will add more than 2,700 new fast chargers at various public venues over the next five years.

“All of that makes it a truly compelling product,” Carlisle said. “It starts and ends with product, but it’s also about the entire customer experience and ownership experience.”

Found funds?: How to find unclaimed money that may be owed to you

The Lyriq’s marketing is crucial, too. Cadillac must give customers a seamless experience with buying and owning the vehicle, said Melissa Grady, Cadillac’s chief marketing officer.

“We need to … eliminate any friction. When you look at a truly friction-less process you know it. It’s the feeling like buying something on Amazon and two clicks and it’s on your doorstep,” Grady said. “That’s not where we are now. But we know this is extremely important to EV customers.”

Cadillac is looking at ways to improve the myCadillac Mobile App .

“We’re totally re-imagining the app,” Grady said. “How do we create a worry-free experience? We’re looking at the charging ecosystem and telling people where they can stop along their journey — knowing ahead of time what their journey is — to recharge.”

Grady said her team is looking at every aspect of, “what it means to be Cadillac for our EV future. The launch of Lyriq is more than just the launch of the vehicle, it’s our future.”

In February, Cadillac launched the redesigned 2020 Escalade, its popular full-size SUV. It has 6,000 orders, Carlisle said.

“We’ll start shipping those to dealers at the end of the month and in early September,” Carlisle said.

The Escalade has been a Cadillac icon for years, so expect an all-electric version of the vehicle, which GM alluded to in its recently released 2019 Sustainability report and Carlisle hinted at as well.

“The Escalade is a franchise on to its own,” Carlisle said. “In other venues we’ve talked about electrified trucks and larger vehicles. So stay tuned on that one.”

“The Escalade has a name and we don’t intend to change that, as to what would we name an EV Escalade? That’s a conversation for another day,” Carlisle said.

He said any change to the iconic Escalade name would be a difficult decision, but Carlisle diplomatically said, “We’ll take it under advisement,” when reporters asked whether Cadillac would tack “iq” on the end of the name for an electric Escalade.

The automaker is investing $2.2 billion to retool its Detroit-Hamtramck plant to assemble all-electric vehicles. GM has committed only to start building the electric GMC Hummer pickup there next year, then the Cruise Origin later.

In March 2019, GM said it will spend $300 million to build a new electric car at its Orion Assembly Plant north of Detroit. GM presently builds the Chevrolet Bolt at Orion.

In its 2019 Sustainability report, GM listed these forthcoming EVs: