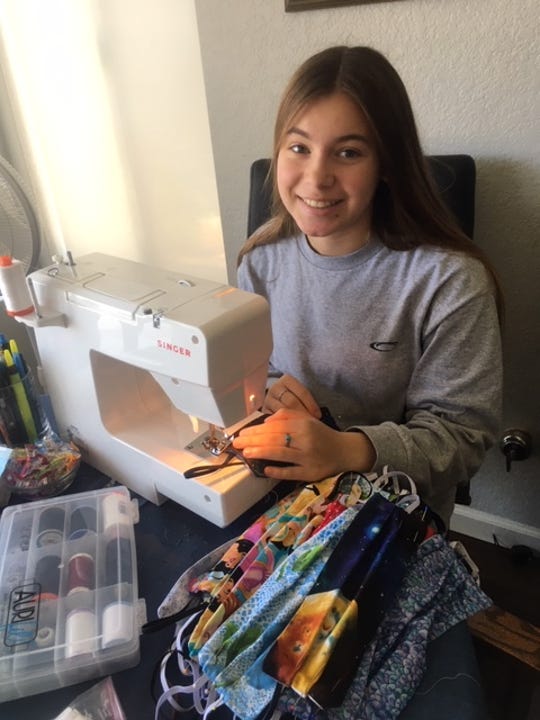 Ryann Avery, 15, of Oceanside, Calif., is one of thousands of volunteers across the country making masks and donating them to those in need. (Photo: Courtesy)

They are being sold by Kim Kardashian West, Gucci and plenty of others looking to make a buck.

They have led to lawsuits, violent assaults and police intervention.

They could help determine whether President Donald Trump or Democratic challenger Joe Biden emerges as the victor on Election Day.

“Masks are becoming a new dividing line,” said Douglas Brinkley, a professor of history and the Katherine Tsanoff Brown Chair in Humanities at Rice University.

A sign of the maskmaking madness: A recorded phone message for customer service at Singer, manufacturer of sewing machines, warns of hold times exceeding an hour because of “an extreme increase in call volume due to COVID-19 and a need for sewing materials.”

Colorful, creative and ubiquitous, face masks are leaving an imprint on politics, culture and industry – and business is booming.

Make your own mask: How to make your own face mask to help stop the spread of the coronavirus

Entrepreneurs, it’s time to pivot: Here’s how to switch gears amid coronavirus

Cashing in on masks

The global face mask market in 2020 is valued at $4.5 billion and is likely to grow exponentially, according to figures released in March by Market Research Report. The big players include 3M, Honeywell International and Owens & Minor – three U.S. companies awarded $133 million in Pentagon contracts in April to produce 39 million N95 masks for medical workers fighting the coronavirus crisis.

Q2Today, a Utah-based company that makes air-filtering masks, reported that sales increased by more than 400% from February to March.

“These numbers would have been much higher, but we sold out of what would typically be months of inventory in only a five-day period in March,” said Bruce Lorange, founder and CEO of O2Today. ”So for most of the month, we were out of stock.”

Etsy, the e-commerce website, followed that up with reports that it sold about $133 million in face masks on its site in April.

Kardashian West, who launched her own line of masks priced at $8 apiece May 18, announced on Twitter that the collection sold out within hours.

Then there’s the “Criss-cross Gucci Gray” face mask that has sold for $200.

Hillary Taymour, a fashion designer who said she has made about $10,000 by selling $100 face masks and has raised almost three times as much for charity, said other clothing companies rake in far more than she has.

A face mask that sold for $620 at a silent auction charity for COVID-19 relief efforts was made by Hillary Taymour. (Photo: Courtesy)

“There are brands that I think are treating face masks like warfare almost,” said Taymour, founder of the clothing line Collina Strada. “Like someone who’s hustling guns and stuff during a war. It’s definitely that level.”

For weeks, vendors have been selling masks on the streets, at some risk. Preston Liddell was fined $450 for illegal vending in Dallas on May 8 because he was selling masks on private property. Lidell, who charges $5 for five masks, provided USA TODAY an image of the citation.

“I make masks and sell them in communities where people don’t have access to them,” Liddell said in an email. “I’ve been getting chased out by several cities including Irving, Dallas and Mesquite. The police are great with me, but once a local business complains, they have to ask me to leave.

“I wanted to make people aware of this injustice amid this huge crisis. People should have access to be able to buy local-made masks in this emergency situation. Especially when the permit process is slow and in some cities, they’re not even issuing them.”

Face masks, available in a vast array of colors, patterns and designs, present an opportunity for political expression. Some masks bear slogans such as “Don’t Drink The Bleach,” “Hoax,” or “If You’re Not Mad, You’re Not Paying Attention.”

Johanna Blakley, managing director of the Norman Lear Center at the University of Southern California, studies the intersection of fashion and politics. (Photo: USC Annenberg School for Communication and Journalism)

“Any accessory that we wear reveals something about our taste and our tribe,” said Johanna Blakley, managing director of the Norman Lear Center at the University of Southern California. “A watch, a hat or a handbag can speak volumes. The public health directive to wear masks gives us a golden opportunity to advertise something about ourselves on our most valuable personal real estate – our face!”

There are those who refuse to wear masks, even if it prevents them from at shopping at certain stores or puts them at risk of public shaming. Six weeks ago, Dave Kelman of Las Vegas created a Facebook group called “Bare Face Is Legal.” It has about 9,000 members.

Kelman and others railed again Thursday when New York Gov. Andrew Cuomo signed an executive order allowing businesses throughout the state the right to deny entry to customers not wearing a face mask.

“What got me started is I saw cities wanting to start ordinances” requiring people to wear masks, said Kelman, founder of Barefoot Is Legal, a group that fights for the right to go shoeless. “I started monitoring that, and when New York state was the first one to try to force masks on people, I said, ’Let me start this group just in case.’ “ 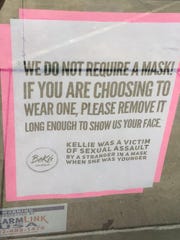 A sign on the door of Kellie Johnson’s store in Lincoln, Neb., bucks the trend of requiring patrons to wear masks. (Photo: Kellie Johnson)

Members of the group include Kellie Johnson, owner of Beka Boutique in Lincoln, Nebraska, who asks customers to remove masks long enough for their faces to be seen. She said she is the victim of sexual assault and her attacker wore a mask. 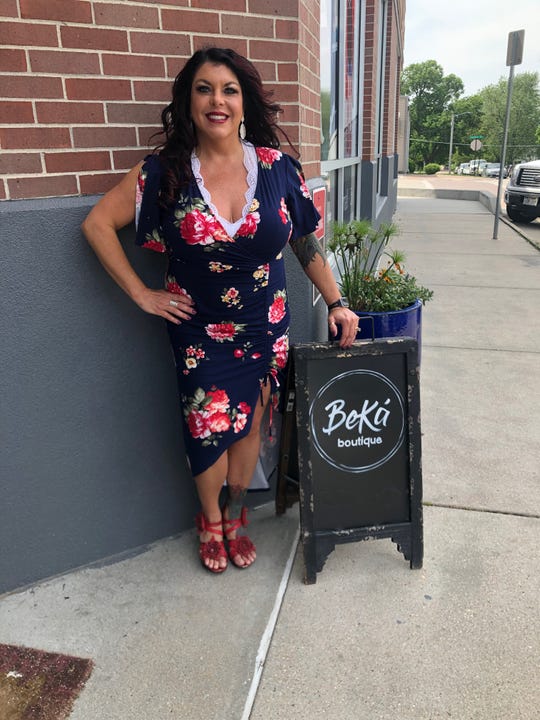 The group reached out to attorney Thomas Anderson, who represents the plaintiffs in seven lawsuits filed against Giant Eagle supermarkets in Pennsylvania claiming the supermarket chain’s policy requiring masks violates the Americans With Disabilities Act.

A more pervasive rallying cry is that requiring masks amounts to an infringement on civil liberties and freedom.

“It’s been fascinating to see the anxieties about masks that have surfaced,” Blakley said in an email. “They’ve been cast as un-American, as unmanly (I wonder if someone has referred to being eMASKulated yet!). They imply illness and fear of infection.”

Dave Kelman, founder of Bare Face Is Legal, a group whose slogan is “Free the human face from a mask,” fights mandatory mask-wearing during the coronavirus pandemic. (Photo: Courtesy)

Two weeks ago, Kelman launched a website (realbarefaceislegal.org) that includes videos of the following:

•Philadelphia police removing a man from a city bus because he was not wearing a mask.

•New York police grappling with a woman in front of her child after the woman reacted angrily when she was told she could not ride the subway because her mask did not cover her face.

•An off-duty police officer working security at a Walmart in Birmingham, Alabama, body-slamming a woman  who refused to wear a mask.

What Kelman’s website does not include is video of a TV reporter harassed outside Shady’s Tavern in Albany, Minnesota, because he was wearing a mask.

“Take it off,” chanted a handful of people demanding the bar be allowed to legally reopen.

“There’s no question that masks have been politicized,” said Blakley, who cited a poll by The Associated Press-NORC Center for Public Affairs Research that found Democrats are more likely than Republicans to say they wear a mask when leaving home, 76% vs. 59%. “We typically look to leaders to model appropriate social behavior and so it’s not surprising that a majority of Republicans are emulating the actions of their political leaders.”

Brinkley, a presidential historian for CNN, suggested face masks could help decide who will be the leader of the free world at the end of Trump’s first term.

The politics of masks 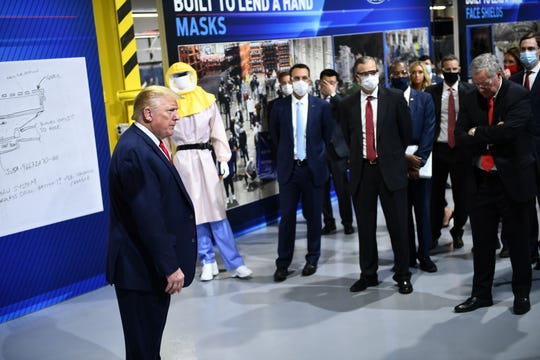 President Donald Trump tours a Ford Motor plant that was converted to making personal protection and medical equipment in Ypsilanti, Mich., on May 21. (Photo: Brendan Smialowski/AFP via Getty Images)

The two tangled over the issue. Biden called Trump “an absolute fool’’ a day after Trump mocked Biden for wearing a face mask on Memorial Day. They continue to tangle on a related issue.

Biden pushes for mail-in voting, saying it would reduce the risk of voters getting infected with COVID-19. Trump rejected the idea, arguing that mail-in voting is susceptible to fraud.

Democratic presidential candidate Joe Biden wears a face mask as he and his wife, Jill, depart after placing a wreath at the Delaware Memorial Bridge Veterans Memorial Park on May 25 in New Castle. (Photo: Patrick Semansky, AP)

“The Democrats need (mail-in voting) because you can’t have people wearing a mask, social distancing 6 feet in 20-degree weather in Detroit and Milwaukee voting,” Brinkley said. “And so Trump is saying the mask isn’t that big a deal and you’ll have to line up and vote like everybody else.

“Trump has rural America. You don’t wait in lines in rural America. You go to the local school or firehouse and spend about 10 minutes and you’ve voted. But in urban centers, in the winter, particularly the all-important Great Lakes region, the idea that you’re going to wait four hours in the cold wearing a mask and social distance when there are rumors of a COVID second wave going, it’s going to leave a lot of urban voters staying at home.

“So it’s playing out right now in a lot of different ways – the mask.”