The U.S. economy lost 20.5 million in April and the unemployment rate soared to 14.7% — both record highs — laying bare the starkest picture yet of the crippling gut-punch delivered by the coronavirus pandemic.

In just a month, the historically dismal performance abruptly wiped away nearly all the nation’s job gains since the Great Recession of 2007-09. The reversal has been head-spinning: The jobless rate had touched a 50-year low of 3.5% in February before rising to 4.4% the following month amid the early effects of the crisis.

Few corners of the economy or country were spared, although some groups felt the impact more than others. Manufacturing and tourist states bled jobs. Women, the young and people of color, were especially hard hit by layoffs. And businesses where people once gathered to eat, drink and shop suffered the brunt of social distancing crackdowns.

Yet while the job losses are Great Depression-like, the reality is more nuanced. The government took the unprecedented step of placing the economy into a kind of induced coma to contain the spread of the virus. While that could mean a swift rebound as businesses reopen, a significant portion of the damage is expected to last years.

In April, the share of Americans working or looking for jobs — which together make up the labor force — tumbled from 62.7% to 60.2%, lowest since 1973, the Labor Department said. Many people who lost jobs didn’t look for work because of fears of catching the virus while job hunting, caring for sick relatives or watching kids who were home now that schools are closed. Also, with much of the economy shuttered, there were few jobs available.

Portraits of economic pain: ‘All night, my eyes are open’: After mass job losses, Americans forced to choose: Pay bills or buy food?

That decline kept the unemployment rate from rising even further.

Also, many workers incorrectly said they were employed but absent from work, Labor said. If they had been properly classified, the unemployment rate would have shot up to 20%.

A hopeful sign: Of the 20.6 million workers who lost jobs in April, 18 million said they were on temporary layoff, indicating the lion’s share of the positions could come back when businesses open their doors or restart their assembly lines, helping the economy snap back more quickly.

“The fact that so many of the job losses are temporary is encouraging, and suggests businesses will have an easier time re-opening once they are confident doing so,” says economist Leslie Preston of TD Economics. “However, the millions of workers who have left the labor force will need to be drawn back in, and this process could take time.”

Another 10 million or so jobs could drain away in May before the labor market begins to rebound in the second half of the year, economist Ian Shepherdson of Pantheon Macroeconomics expects.

Wall Street investors looked beyond the grim toll last month and focused on the possibility that the economy could return to growth as states reopen for business. Stocks jumped Friday as hopes rose that the worst has passed for the U.S. economy. The Dow Jones industrial average climbed more than 350 points, capping a six-week rally built on the government’s massive relief packages and optimism that the U.S. is headed for recovery as more stores and services try returning to normal.

Take a breath: 5 reasons why you shouldn’t freak out about 20.5M job losses

In April, job losses were broad-based across industries but particularly hammered restaurants and bars, and retail.

Every state also has been battered by massive layoffs but those that rely heavily on tourism were hit worse, including Hawaii, Nevada, Florida, South Carolina and Louisiana, according to an analysis of jobless claims by the Economic Policy Institute.

Manufacturing strongholds like Michigan also have been affected, the EPI study shows, because many factories are shut down and employees can’t do those jobs from home.

April’s dramatic numbers reflect the nation’s emergency response to its worst health crisis in a century. 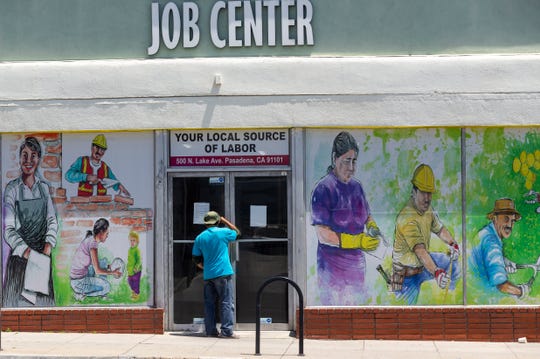 A worker looks inside the closed doors of the Pasadena Community Job Center in Pasadena, Calif., May 7, 2020, during the coronavirus outbreak. The center normally connects members of the community, residential customers and small business owners with skilled day laborers. (Photo: Damian Dovarganes, AP)

April’s net payroll losses reflect not just layoffs but also a plunge in hiring amid pervasive business uncertainty. Job openings have fallen 28% since early March, according to Glassdoor, the job search site.

The numbers are staggering and the economy’s outlook is uncertain. More than 40 states have started allowing businesses to partially reopen despite a still-rising number of coronavirus cases. Assuming the pandemic eases by summer, economists expect a solid recovery in the second half of the year.

But lingering consumer caution and a possible second wave of the virus is likely to continue to crimp economic activity at least until a vaccine is available, possibly by early next year, economists say. Unemployment will end in 2020 at a still-elevated 9%,  Moody’s Analytics forecasts.

“While we are hopeful many (of the unemployed) will get back to work in the coming months, there will be severe scarring effects on the labor market for years to come,” says economist Paul Ashworth of Capital Economics.

‘I was starting to gain steam’

“I feel like I was starting to gain steam,” he says. Now, he worries another downturn could undo much of his accomplishments.

Industries that are slashing jobs

Leisure and hospitality was hit hardest in April, with 7.7 million job losses, or nearly half its total employment, mostly in restaurants and bars. Professional and business services shed 2.1 million positions in a sign that layoffs that largely began in retail and restaurants have spread to white-collar fields. Healthcare and retail each lost 2.1 million jobs; manufacturing, 1.3 million; construction, 975,000 and financial activities, 262,000.

Local government lost 801,000 jobs as schooland state governments, 80,000. the federal government, which has rolled out unprecedented programs to respond to the crisis, added 1000 jobs.

The 14.7% unemployment rate highlights only part of the economic carnage set off by the COVID-19 outbreak. A broader measure of unemployment — that includes Americans working part-time even though they want full-time jobs, discouraged workers who have stopped looking and the unemployed – leaped from 8.7% to 22.8%, THE highest on record.

Minorities and less-educated workers were especially hard hit as most of the job losses affected low-wage service industries. Unemployment jumped to 16.7% for blacks and 18.9% for Hispanics. And the jobless rate climbed to 12.9% for high school graduates and 14.4% for those without a high school diploma, compared to 5.9% for workers with a bachelors degree.